Golden Hour on the Hudson Once again, we are grateful to be based in New York City.  This session fell into our lap and we were amply rewarded for being able to move quickly to schedule yet another model "passing through New York."

Nicholas was enroute to Europe for grad school.  The Midwestern fitness model had just done a photo session in Florida and was able to snag a few days to be captured amid the skyscrapers of New York before departing the country for school abroad.  It was quick scheduling on both ends after we'd been introduced to the model by mutual friends in California, MGStudios.

We were able to work with Nicholas (@nickwithmuscles on Instagram) twice as he passed through New York.

On Day One, we worked on the banks of the Hudson around the marina at the World Financial Center. It had been a rainy day and we had delayed the session until the late afternoon when the storm had passed.  August-hot streets and sidewalks were still wet, wafts of steam rose from the drying pavement.  It was a break to work along the river.

I'm always impressed with how in stride some models can take posing in public.  (Many can't and won't.)  With hundreds of onlookers on an early evening in August, Nicholas serenely and confidently slipped into his gym shorts and started flexing and posing on, across and around the sidewalks and plazas of the World Financial Center, short blocks away from Wall Street. 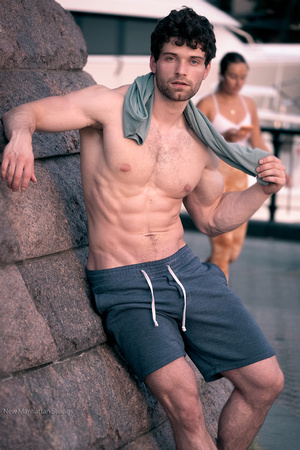 As the last of the storm clouds passed over us, the sun broke through the scattering clouds to the west. The light was almost theatrical in hue and constantly changing.  The cool tones of the Blue Hour dominated the skies above and behind us.  As the sun fell to the horizon it flooded the skies over New Jersey and the Hudson River with the warm palette of the Golden Hour.  The uncanny part of the experience was that the color sequence was in reverse.  We started working in the blue light of storm clouds and ended in the Golden Hour.

On Day Two, we brought the model into the studio for another mix of lighting scenarios:  high key and low key.  Looking for equipment, I stumbled across some feathers that I'd purchased as props.  Once owned, they had seemed too effeminate for physique models and they had languished in the closet.  This day, Alex and the model had seen them and both urged giving the plumes a shot at Instagram infamy.

As soon as Nicholas turned toward the camera and drew the long peacock feather across his chest, it clicked for me.  It was the ideal prop:  it is the proud male peacock that sports the bright plumage.

Nicholas' torso hardly needs adornment.  He is very close to perfection.  His bare physique is one of the most chiseled and perfectly proportioned in the studio's portfolio.

Holding that feather wasn't embellishing or preening.  Holding that symbol of beauty was his right.

The Peacock is one of 3 galleries featuring our work with Nicholas.  You can enter all 3 from the links below.