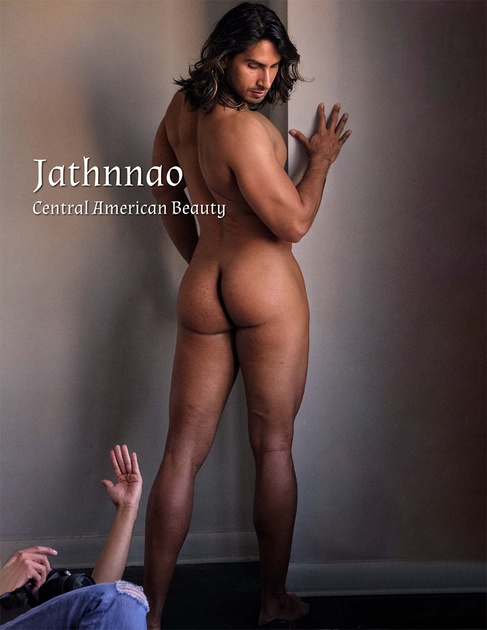 Jathnnao's photo shoot was challenging for a variety of uncommon reasons.  Through the first half of the session we struggled to pronounce his name correctly.  Despite repeated attempts at coaching, I am unsure that we ever got it right.

Next was his uncanny resemblance to a certain historical religious figure.  Initially, I worried that some might think it sacrilegious to be photographing this model in the nude.  Then I realized that some of the most iconic images of his doppelgänger were precisely that: paintings of a boldly-posed male nude torso.  We proceeded cautiously, resisting any attempts to pose him with outstretched arms.

More challenging, however, were the multiple sources of light in play over the course of his session.  It was a rare late afternoon shoot and we seized the chance to work in the natural light pouring through the studio windows.  However, the mid-winter day was short and within minutes of starting, the light began shifting from the warm hues of the golden hour into the cool tones of the blue hour.  I loved the moodiness of the shifting light, but photos taken just minutes apart appeared to be from different sessions.

As the natural light faded, we supplemented it with incandescent lamps.  The last half of the session was shot entirely under studio lights, using both hot lights and the crisp white light of strobes.  Ultimately we had roughly a half dozen completely different lighting schemas that slowly bled into one another.  For a story-teller, it made it very challenging to complete any one set of images in consistent light.

The model, for his part, looked striking under any light.  His well-honed torso was perfectly proportioned for his 6-foot frame and he was an experienced model with a good sense for posing.  Wtih over 100 models in our portofolio, we have precious few models from Central America and we are happy to open a new gallery with more than 3 dozen images of this Costa Rican model.