Bull in the China Shop 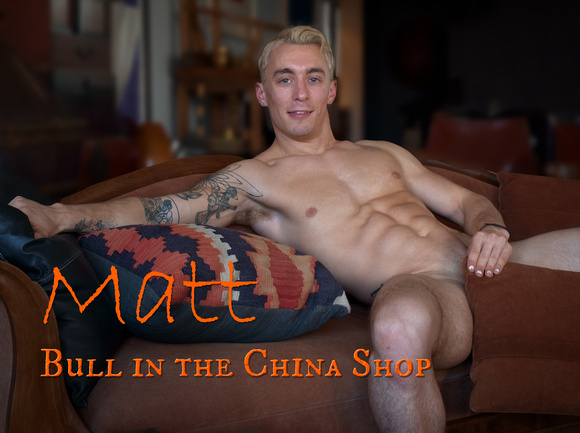 Matt’s folder has been patiently riding out much of the pandemic.  His was one of the first sessions we shot indoors at the end of the first year of Covid.  Part of a larger project, we've been holding back on opening his galleries.

Matt ties Bond for the title of “most energetic” model.  Both men approach modeling with immense enthusiasm that is manifest in spontaneous bursts of physical activity.  Slowing only to listen for the shutter’s click, they are almost constantly in motion at their photo shoots.

Especially outdoors, Bond is fond of looking for objects to scale; things to stand on or to hang from.  In the studio, he is known to flip cartwheels, walk on his hands, climb atop furniture and press studio props into service in exercise routines.

Bond was the first model that we shot in a treasured studio venue, a loft on Madison Avenue in midtown Manhattan.  The space is unique and reflects the personality and profession of its owner, an interior designer.  It is filled with original art, antiques and a wide range of collectibles acquired over a lifetime of world travels.  Matt is one of the most recent models to enter the space.

Doing a photo shoot in the loft is like working in a museum (a very crowded museum) and the models have intuitively approached it as such.  Maneuvering through any number of objects, it’s impossible to move quickly through the space without fear of toppling priceless artifacts.  The respect that the space commands is so palpable that even Bond was cowered into submissive meekness.  For a couple of hours, he held his “boundless energy” in check as he cautiously posed amid the art. 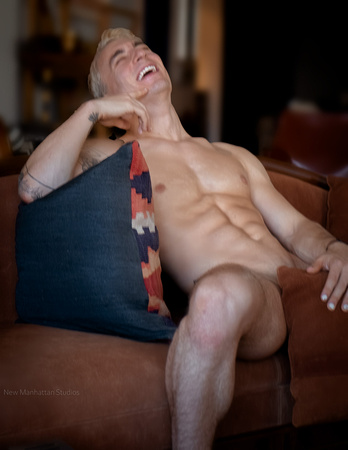 Not so with Matt.

Matt appears to have two speeds:  on and off.  And when he’s “on,” he’s on at full speed; ceaselessly in motion, stretching, twisting, leaping, arching, bouncing.

With no prompting, he was on top of tables, standing on chairs, draped over couches, up on windowsills and leaning against plate glass windows hundreds of feet above the street.  It was a challenge for Alex to keep a path cleared ahead of the model, to move objets d'art out of harm’s way.  I was repeatedly holding my breath; I feared we had brought a bull into the china shop.

Fortunately, neither model nor art was harmed in the process.   Matt’s torso is as honed and toned as any in the studio’s portfolio.  He was an ideal complement to the art surrounding him; a classically proportioned body that you might find rendered in stone in a museum.

As of this fall, we have now shot 10 models in this photogenic space over the past decade. To celebrate the ten men that have posed among the art and antiques, we are bringing them together under one cover.  Matt will join Bond and 8 other models on the pages of a new studio publication, Madison Avenue Loft, to be released in early 2023.

In the meantime, have a look at Matt’s gallery here.