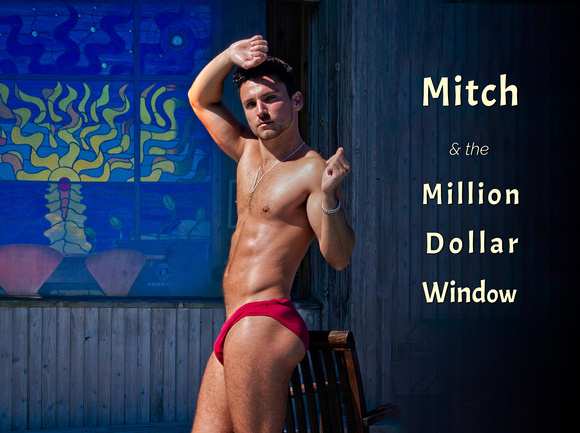 Shooting inside one of the legendary homes on the bay side of Fire Island was an education as well as a delight.  Its abundance of nooks, crannies, corners and vistas made it a photographer's paradise.  Talking with one of the island's long-time summer residents revealed a great deal about the history of the house, the community and the economics that drive it.

The house we used as our base was secured for us by one of the models.  He had a personal history with the property and assured us that it was one of the original party houses built in the 1970s.  Its courtyard houses a hot tub surrounded by living spaces and a gallery.  Its indoor shower can hold 12.  On the bay side was a pool and a large deck with multiple levels and a view of Sayville, miles across the bay.  (See photo below.) After a quick survey, we got busy.  With a new assistant in training, Alex worked with one model while I worked with another.  We traded off once before lunch.  And that leopard skin?  It's not a rug, it's the cover for the hot tub.

The housekeeper was at work when we broke to have lunch in the dining room.  By appointment, a scouting crew from the television series American Horror Story came through, discussing the lighting of the stained-glass window on the wall behind us.  They were filming there one month later.  I gave the window little attention as we continued eating only to learn at the end of the meal that said window was created by Marc Chagall, the prolific mid-century European artist. 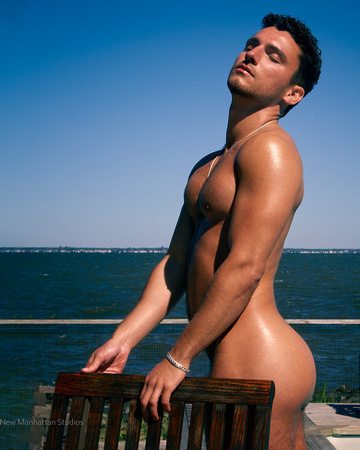 Reflecting on the timeline of Chagall's body of work, I realized this house, dating to the 1970s, was built well into the artist's hugely successful career.  His monumental murals had adorned the plaza-facing walls of the Metropolitan Opera House in Lincoln Center for over a decade at that point.  This window, depicting the bay at sunset, was clearly created for this wall, mimicking, as it does, the view behind it.  Whatever it must have cost to have commissioned such a piece of art, it was an extravagant gesture for a resort house. I learned that it is currently valued at one million dollars; perhaps a third or a quarter of the value of the entire property.

On the ferry ride home, I was annoyed that I had not taken a photograph of the window.  It just hadn't entered my mind at the time.  Downloading the files to my PC that night, I was delighted to find the window in the background of a series shots taken of Mitch outside the house.  In the photo above, you are looking at Mitch outside the clear glass dining room window.  The two orange, triangular-shaped discs on the center left are backs of chairs in the dining room.  The stained-glass window is on the far dining room wall.

So, what about these properties. . .the incredible resort homes that have been built in Fire Island Pines over the past half century? Today, most of Fire Island is a national park.  How did such expensive properties ever come to be?  Who initially owned this (is)land?

The answer is the Town of Sayville, a couple of miles across the bay, on the south shore of Long Island (again, see photo at left).  In the early part of the 20th century the town, like others in the area, sold off lots on the barrier reef directly south of the town.  The area known as Fire Island Pines was purchased by four different local families in the 20s and 30s.  Over the years they developed and subdivided their properties into hundreds of lots and capitalized on the post war boom in the 1950s and 60s. Governed by the Town of Sayville, building codes for the barrier island stipulate that all structures must be built of wood.  The housing stock varies from mid-century-modest to over-the-top architectural statements. Almost all are summer homes (not "winterized"), rented for no more than 4 or 5 months out of the year, mostly as group rentals. Many of the private homes, such as this one, are architectural showcases.

Homes here must withstand two of the elemental forces of nature, water and fire.  House fires are common among these wooden structures and hurricanes have reshaped the island and its houses many times.  Current National Park regulations stipulate that any house destroyed by nature must be rebuilt within 2 years or the property reverts to the national seashore.  Despite all odds, gut renovations and new homes continue to be built on this precarious spit of land.

And here is the kicker.  Since Hurricane Sandy in 2012 (10 years to the day of writing this) the Federal Government no longer subsidizes insurance for rebuilding homes in hurricane-prone areas.  What private insurance is available is prohibitively expensive.  Most homes on Fire Island are no longer insured.

That million-dollar window, a treasure of mid-20th century art by a world renown artist, is housed in a wood frame structure on a small barrier island in the path of hurricanes.  Uninsured. 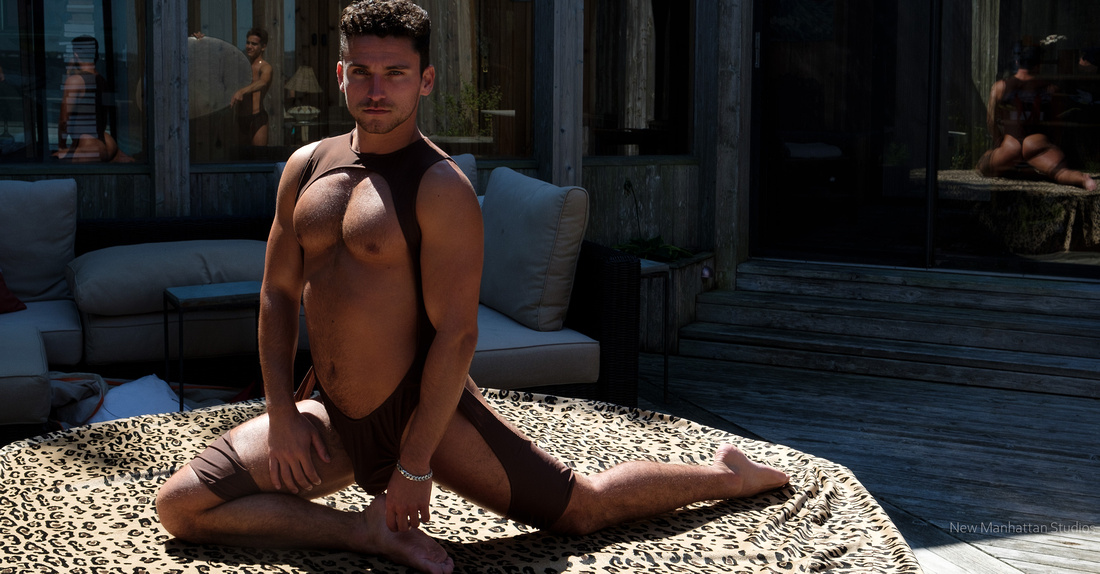 And in the middle of it all, we captured Mitch.  In front of the window, on the deck, in the pool, in the shower, on the hot tub and in the hot tub, on the beach and in the dunes. . .you get the idea.  See it all here.  (And yes, that's me below left, in one of my rare Hitchcock moments.) 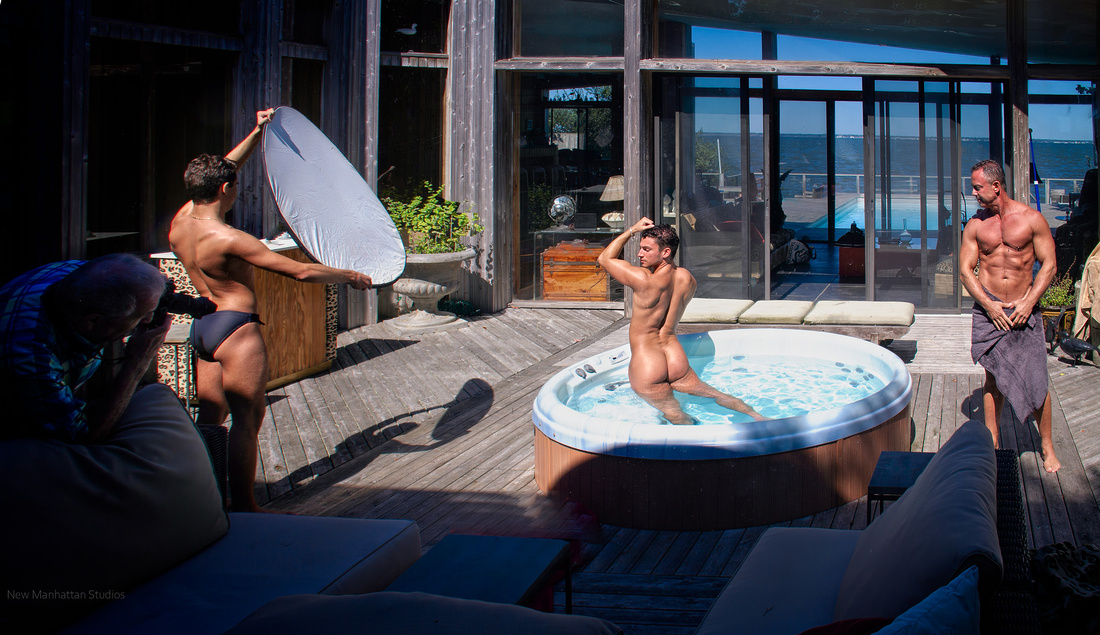