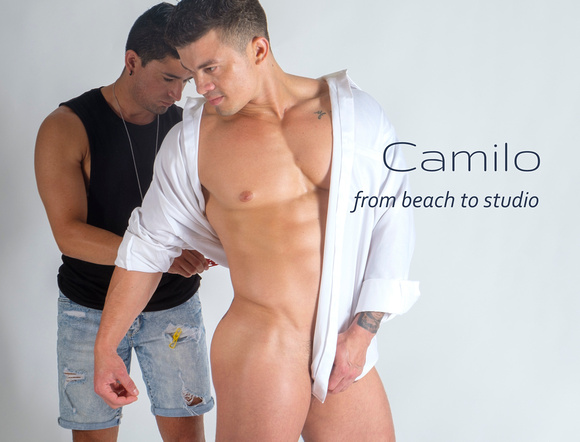 The yellow skies of a dull, hazy morning on Fire Island turned into a bright, summer day at the beach.  A thick amber haze greeted us on arrival but the light was not only ever-shifting, it slowly changed to crisp white.  With it, the color of the ocean changed as well; the muddy, sand-filled surf under hazy yellow morning skies were replaced with green seas reflecting blue afternoon skies.  It was August on Fire Island, the surf was up and the breeze off the ocean was welcome relief for those working in the sun.

Camilo is one of 10 models that the studio has shot on Fire Island.  If not convenient or easily accessible, the dunes and beaches of the famous gay resort community have offered a beckoning venue for socially-distanced shooting during pandemic days.

Historically, its inaccessibility played an important role in defining Fire Island as a major LGBT resort.  Here, the neighboring communities of The Pines and Cherry Grove sit on pristine beaches-ranked among the finest in the world.  Less than 100 miles from Manhattan, on a narrow, barrier reef off the coast of Long Island, the car-free destination is not easy to reach. It was in that very isolation that the emerging gay and lesbian communities nurtured a safe haven in the hostile years after World War II.  Here, far from the prying eyes of the larger society, everyone could relax and be "out" in a welcoming community, if just for a few summer days.  And boy, did the area gain a reputation for "relaxing!" 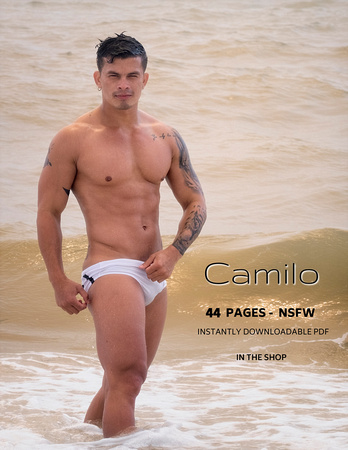 There is no vehicular access to The Pines or Cherry Grove and most summertime residents take buses or trains out from the city to the south shore of Long Island, where they embark on a half-hour ferry trip, carting with them most of the food, liquor and supplies needed for their stay.  (For those with sufficient resources, helicopters from New York City land on small landing pads in the dunes.  Look for the wooden platform with white painted stripes in Camilo's shots.)

The 30-mile-long reef is less than 1500 feet wide and while The Pines and The Grove are a couple of miles long, each is just 2 or 3 blocks wide. They are isolated from neighboring communities by miles of empty dunes and beaches.  Streets are boardwalks and there are few stores, services, bars, restaurants or clubs in the small commercial centers.  Most structures are not winterized so when the weather cools there is insufficient population to keep these businesses operating past Labor Day weekend when the crowds head home.

Less than 300 residents call Fire Island home year-round but each summer they host tens of thousands of second-homeowners, renters and day-trippers between Memorial Day and Labor Day.  The hedonism that characterized the Island in the post-Stonewall years has abated. With so few clubs, lavish pool parties in infamous beach-front homes have long characterized and defined Fire Island's social scene.

The HIV epidemic that decimated the gay community in the 80s and 90s took a disproportionate toll on Fire Island, with many of the most glamorous ocean-front properties changing hands. Though it remains a predominantly gay community today, the mix of humanity seen on the boardwalks of The Pines now has parents pushing strollers past buffed and polished bodies clad in the skimpiest of bikinis.  As ever, the action, the scene, remains behind private doors and garden walls.

Camilo's trip to The Pines began with car service picking him up before 7AM and a 90-minute drive to the ferry dock in Sayville, Long Island.  We reached the island by 10:30, in time for shooting on the beach prior to a lunch break.

The afternoon was spent in The Meat Rack, the stretch of dunes between the two LGBT communities of The Pines and The Grove.  Although nominally protected by laws restricting access to the dunes, the wild area has long been known as a trysting place.  Anything goes along the trails and dunes, dense with scruffy trees and overgrowth. Noon or midnight, the area is a magnet for casual encounters and alfresco sex. 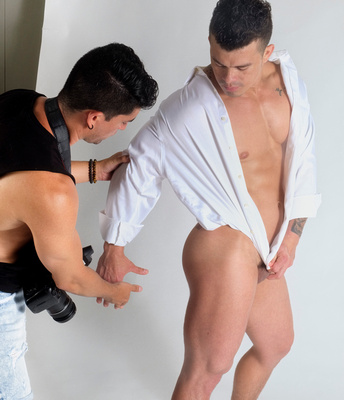 We finished shooting in the dunes in time for an afternoon session (with very different light) on the beach and in the surf.  By late afternoon we were nourishing Margaritas on the patio of a bar, overlooking the small harbor that is the center of The Pines.  By 9PM, Camilo was home.  Alluring as it may be for photoshoots, it's a long day and a long way to go to capture bodies at the beach.

We were happy to invite Camilo into the studio months later as early pandemic restrictions were lifted, permitting indoor gatherings and work.  Our second session with him yielded a set of images distinctly different from those captured under the summer sun. Fortunately, restrictions on gyms were lifted as well, and the model was in excellent physical condition. As he had on the island, Alex assisted at the session with his fellow Colombian.

Camilo is the fourth Colombian in the studio's portfolio, which is not entirely surprising, given Alex's scouting and recruitment efforts in the sizeable Colombian ex-pat community in and around New York.  We have selected 44 of the studio's favorite shots of the model on Fire Island and in the studio for a photo essay entitled, simply, Camilo.  It is offered to his fans as a print magazine or an instantly-downloadable PDF.  For a preview, check out his online galleries using the links below.