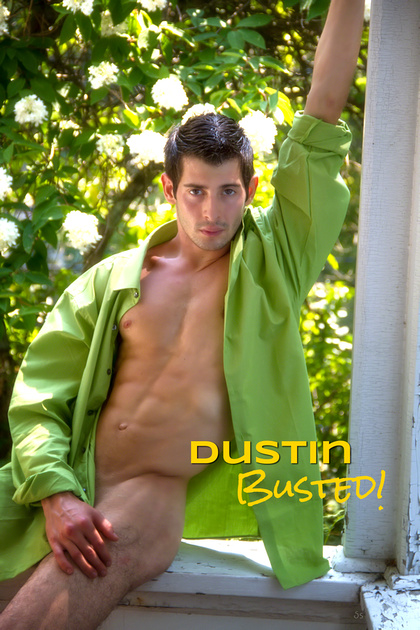 Of the 150-plus models we've shot in over 200 sessions, one of the two August afternoons we spent with Dustin stands out from all the rest.  It is the only New Manhattan Studios photo shoot that was busted by the police.

Dustin has proved to be very popular over the years, but his session actually predated the studio's website by a few months and he's never had the introduction (and recognition) that he deserves.  Pandemic-abundant downtime has provided ample opportunities to redress this omission.

Dustin is one of 8 models featured in Berkshire Place, a compendium of work shot in the Berkshires of Western Massachusetts.  The model now stands on his own in Dustin, a new 40-page photo essay, featuring work captured in New England's lush summer greenery.

The setting was Norman Rockwell's hometown in the bucolic rolling hills of Western Massachusetts.  A classic New England village with no stop light and barely enough crime to warrant a police force, its crime-busting reputation is best known for folk-singer Arlo Guthrie's arrest for littering, documented in the 60s movie, Alice's Restaurant.

We were working on the porch of a home, perched on a hillside and long neglected after the death of its elderly owner.  I had been a weekend neighbor for years.  Overgrown and abandoned, the property had taken on the characteristics of a child's vision of a haunted Victorian house.

But it still had a great porch and in August it was surrounded by a profusion of blossoms and leaves.  Trees and shrubs hid it from both a state highway at the foot of the hill and a Bed & Breakfast inn next door.  We had visited the home countless weekends prior to the death of a cherished neighbor, but no one had been in the house for years.

Cars buzzed by, oblivious as to what was happening in the trees on the hill above them.  We were in a private, bright green room.

The picture on the top left was taken approximately 30 seconds before we heard the shouts of "Police!" from the side of the house.  Dustin had his back to the highway and was first to see the cop.  He scrambled to find his clothes as an attractive, young policewoman rounded the side of the porch.  Blonde and barely older than the model, she appeared to have been sent by central casting. 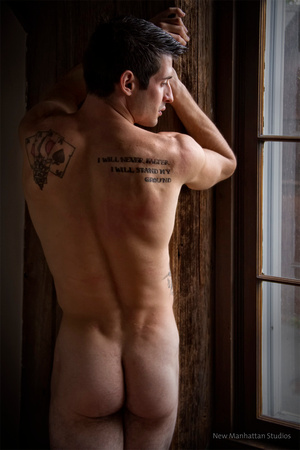 The cop wanted to know what we were doing on the property and asked to see our identification.  It was obvious that Dustin had no ID on him (or much of anything else) and mine was across the yard in my own home.  Stumbling for words and with my heart in my throat, I explained that we were doing a photo shoot on what had been part of "my world" for years.  The policewoman's grave expression indicated my excuse didn't mitigate the fact that we were both trespassing and the model could be arrested for indecent exposure.  (This was not Norman Rockwell's type of art.)

Once Dustin had gathered his clothes and was dressed, the policewoman accompanied us across the lawn to my property. Several paces behind me I could hear the her asking the model why he "does this."  I don't remember his answer, I was too preoccupied with crafting an explanation I could give the police chief who I had known for many of the years I had owned a weekend home in the community.  I had no idea where this might lead or end.

When we got to the house I went inside to find my wallet.  Dustin entered a few moments later and from the front window (right) we saw the policewoman go down to the patrol car in the driveway.  She appeared to be retrieving something, but instead started the car and backed out of the driveway. Turning the patrol car around, she drove down the hill.

We stood at the window for a couple of minutes waiting for her to return.

Dustin and I processed the incident differently.  I was rattled and waiting for the other shoe to drop.  Dustin summed up his reaction differently, "She can slap handcuffs on me whenever she wants!"

The other shoe never dropped.  I have no reason to think that the incident was not recorded on the appropriate police log but I never heard anything from the police chief and I never saw the cop again.  The cop had apparently accomplished her mission:  she'd chased trespassers off the abandoned property.

We eventually finished Dustin's shoot inside and "Dustin" features 40 images from before and after the bust.

It was the last time I shot on the property next door.