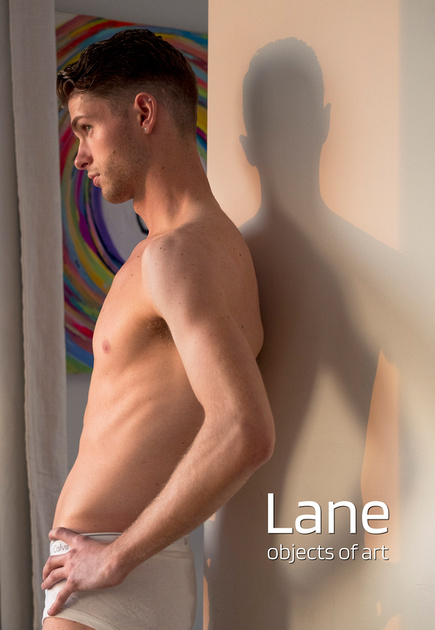 The studio reopened its doors with the bang of a three-sided drum when we shot three new models in the space of three days in March.  It had been precisely one year since our last work in the studio.

All relevant social distancing and masking protocols were observed. Covid tests required all around and a partially-vaccinated crew greatly reduced but did not eliminate all risks.  Nonetheless, the post-pandemic world was coming into view.

The distinction of cutting the ribbon on reopening the studio doors goes to a new model from Virginia, Lane.  In town for a week, he was accompanied to his sessions with a friend (who appears occasionally in some behind-the-scenes shots).

We did the first of two sessions in the studio.  The second session took place in an unusual space on the rapidly-gentrifying Lower East Side.  Our venue was housed in a modern condominium building, one of many luxury buildings nestled amid the neighborhood's legendary tenements.

The space had been used by an artist as a working gallery and residence. During the pandemic it was being rented out as an exhibition and event space, with dozens of the artist's work on display throughout a 2-level loft apartment.

Posing Lane's toned and sculpted torso amid the paintings in the gallery space was more than using art to create art, it was akin to placing a new piece of art amid competing objects of interest and beauty; a creative challenge that could have best been met by an interior designer or museum curator.  We did have, however, the assistance of Lane's friend who had accompanied him on his trip to New York (on lower left).

The studio does not permit non-participating by-standers at sessions, but for Lane, having a friend nearby was an added a measure of comfort for his first modeling sessions in New York.  His friend was deputized as an assistant, holding reflectors and assigned the stylist's task of paying attention to the extraneous details of the background.

We are pleased to open two galleries showcasing our work with Lane in both the photography and the art studios.  We hope to bring Lane back for additional work and perhaps to encourage his friend to step out of the shadows as well. Meanwhile, our sessions with the remaining two sides of the 3-sided drum will debut next month.  Watch for Nick and Daniel coming soon.

In the Photography Studio

In the Art Studio