Zachariah is one of two models we shot this fall in a hotel in Long Island City, not far from our earlier home.  The neighborhood has changed dramatically since we leased space in the area.  Long Island City has become a commercial and artistic hub (it's home to major sound stages and television studios) and residential gentrification has overtaken the area between "downtown" and the old waterfront buildings that once defined the industrial area.

I was not surprised to find a new hotel a few blocks from the area's transportation hub.  It advertised Skyline Views and I took them at their word, knowing of the building's location and westward facing guestrooms.

The room had beautiful light and there was a striking balcony but the "skyline view" was pretty much a bust.  Yes, Manhattan could be seen in the distance, but it was behind a very industrial skyline of Long Island City that included one of the city's largest power generating plants.  The view pretty much had to be blown out. 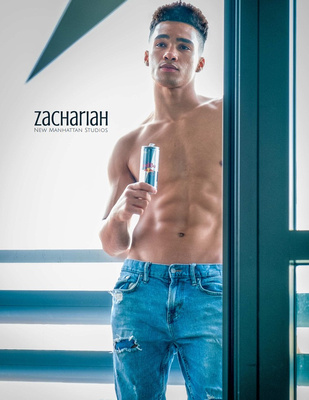 Both models were in from the Midwest.  It was Zachariah's first trip to New York City.  The models were staying in New Jersey, requiring them to traverse Manhattan to get to the studio in Queens.  It must have been frustrating to zip through and not stop in Manhattan on the way to work, but it would be there as a playground when the work was done.  It was all part of the adventure for the 18-year-old from Michigan.

Over the course of several hours we captured Zach in the shower, in the bed chamber and on the balcony.  Work from the session can be seen in his online gallery and in the 36-page photo essay Zachariah, available as a hard copy magazine or instantly-downloadable PDF.

Search for Other Models Here