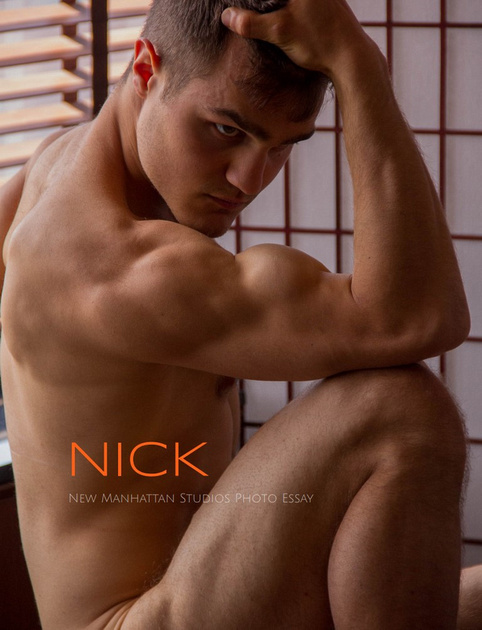 We can thank Instagram for this posting and the recent time we've spent revisiting of a photo session now several years old.

Like most photographers, my relationship with Instagram is a love-hate affair.  I have long resented how the platform has shaped the content of my online portfolio.  If I were to characterize the studio's physical focus in one word it would be "abs."  It is there that we place most of our attention when lighting, posing and composing a shot.  If I were to characterize the studio's Instagram portfolio in one word, it would have to be "asses."  Over the years I've reluctantly shifted to featuring asses over torsos as a means of growing the studio's online following.  Commerce shaping art.

In this case, it is necessary to give credit where credit is due.  If it were not for this model's enduring popularity on Instagram, I would not have repeatedly returned to his folder looking for new content to share.  In the process, I have come to appreciate a session I have long undervalued.

Nick was a 21-year-old body-builder from upstate New York and we had the opportunity to do 3 sessions with him when he spent a long weekend in the city, staying with his brother in the Bronx.

At least half of the second session was spent chasing sunbeams across the room and the model's torso. Dappled or mottled light has always been a creative challenge for me and by that measure it was a rewarding endeavor.  This model's defined torso was easy to light, the shadows from wooden blinds added an interesting graphic element.

When I started editing the work, however, the wisdom of pulling a handy Shogi screen into the frame to hide a distracting background became a questionable move.  The combination of the nearby-wooden blinds, the shadows cast by the blinds, and the bold geometric pattern in the screen created a dizzy-making tableau.  The light on the model was great. . .but lost in the jumble of repeating bold lines and geometric patterns.  I processed few of the images of an otherwise hot, buff model. 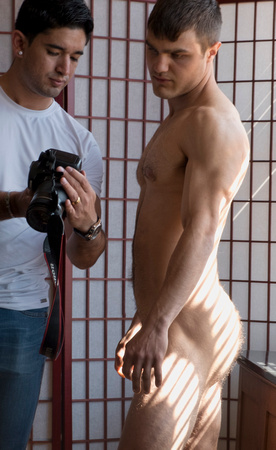 After repeatedly dipping into this folder for new content for the Instagram feed, I begain to reevaluate the second session.  The shots with the Shogi screen were well-received, or to be more honest, the hot model in front of the screen was well-received.  The background did not seem to be an impediment.  Nick's photographs have consistently scored well on Instagram and he remains one of the studio's most popular models.

All of which fed into the creation of NICK, the newest of the studio's photo essays.  The collection features 35 of our favorite shots of the model, most of which cannot be shown on Instagram.  Most of the images are new edits and have never been published before.  (New fans of the model might also want to check out Captured Shadows #5, which features additional images of the model released shortly after the session.)

NICK is available as a hard-copy magazine and as an instantly-downloadable PDF.  Read more about Nick's session here.