Bond at the Roxy - The Farewell Tour

Bond has had more "last" sessions than normally allowed.  He has been retiring on us since our first year shooting together when we ultimately scheduled 3 "final" sessions coincident with his move to California at the end of the year.

This time it's the real deal.

The BOND/ROXY session has been in the can for over a year and we can confirm that Bond has, indeed, finally retired from modeling.  After 15 photo sessions spanning five years, this is the last chapter in the Bond saga. 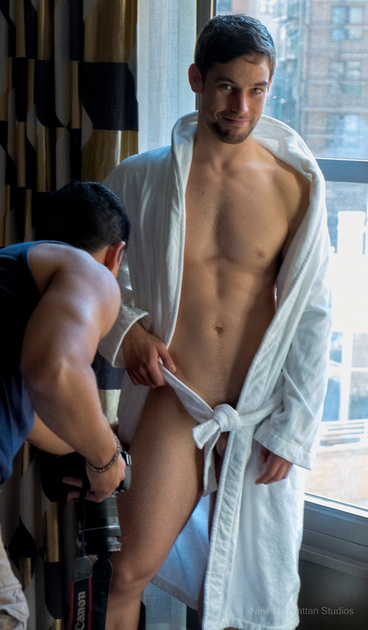 It is fitting that Bond is the first blog entry of the year.  It is a slot reserved for special models that are prominently featured in the studio's current work.  Rest assured, we will be featuring additional work from Bond's swan song over the next few months.

Bond has held the coveted "first slot" once before.  Indeed, he was the first model featured on the blog.  He was also the first model that we shot in the Long Island City studio space that became our home for several years.  He was brand new to modeling.  At the end of the night, accepting our offer of a second session, he chose the modeling name Bond.

Bond was a natural and eased into modeling over the course of a year.  He morphed from the shy, guy-next-door in his early twenties into a hot and confident model, using the classic Bond character, 007, as his inspiration.  Now in his late 20s, he fits the part.

Over the years we worked on locations from coast (New York) to coast (California) to coast (Florida).  We shot on a working farm, along the Brooklyn waterfront and on cliffs overlooking the Pacific ocean.  An earnest and dedicated model but always a very private person, he has not maintained a social media presence and worked with only a small handful of photographers across the country.

From the beginning, when he discovered that Bond had fans, his overriding objective was to please them.  Always the eager and enthusiastic model, never caring who the audience was, he wanted to look his buff, masculine best.  His standards were high; his modeling once went dormant for 18 months when he felt he wasn't in shape.  He did not want to disappoint.

Bond/Roxy features the model in Tribeca, the trendy, 19th-Century waterfront area in lower Manhattan.  Both the gallery and the published photo essay contain representative photos from all the photo sessions in and around the hotel and his suite. The 68-page photo essay is presented in three groupings:  morning, noon and night and contains dozens of NSFW images.

Fittingly, Bond's final trip to New York yielded a treasure-trove of images.  With the assistance of three 2nd cameramen, we captured thousands of photographs over 3 days.  There will be more than one photo collection flowing from Bond's long weekend at the Roxy and this will not be the final blog entry about Bond.  There is more to share.

It was Bond's dedication to his fans that prompted his retirement.  Anticipating that he would loose access to the university gym after graduation (as well as the requisite time to work out), in his final year of grad school he announced that the 007 Session would be his last.  He wanted to go out on a high and we scheduled the session anticipating it would be his last.

But, as had happened before, circumstances brought Bond back to New York later that year, after graduation.  Once again we had a second "final" session.  (Or maybe it was the fifth.)

Knowing his long history of last sessions with the studio, with tongue in cheek, our friend Tye Briggs at Favorite Hunks named this session for us: "Bond at the Roxy:  The Farewell Tour."  More than anyone else, Tye is responsible for the world-wide following that Bond has developed.  He has featured the model multiple times on the FH blog.

As in the behind-the-scenes shot above, you can still see flashes of the early-twenties everyboy who first walked into the studio years ago.  But this is the ultimate Bond.  This sexy, late-20s dude was not just "still in great shape;" physically, he was in the best condition our cameras had encountered. Now out of grad school, Bond wasn't just going out on a high, he was at his peak for his final modeling session.

Bond is not a body-builder as much as he is an athlete, working to stay in shape.  Sitting quietly at the end of our final session, I asked what his motivation for modeling had been.  His response was quick and certain, "Years from now, I want to have documentation of how I looked in my twenties."

The documentation is complete and the body of work is impressive.  We are grateful to have had the opportunity to document Bond's changing looks over so many years and we hope that "years from now" he looks back on our work with as much pride and pleasure as we do.

For the record, Bond graduated with an advanced degree in public health in time to be serving in the greatest public health challenge of our time.  Now a fulltime soldier in the fight against Covid, his modeling days are behind him.  We applaud the work he is now doing and will always be grateful for the time he spent with us.  As a friend and muse of the studio, his contributions to New Manhattan Studios have been profound.

There are more new images to be shared (in curtain calls), but after 5 years and 15 photo sessions,  it's time for Bond to take his final bows.  At The Roxy.

As ever, he wants you to enjoy!

BOND AT THE ROXY Photo Essay