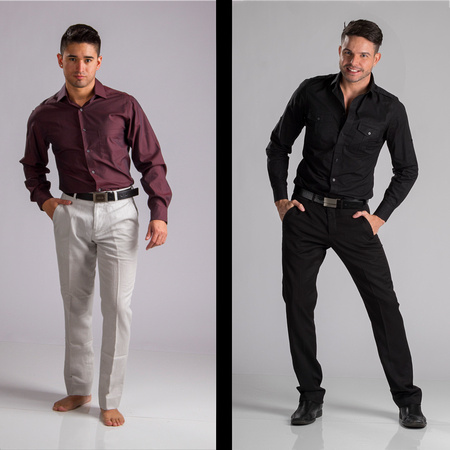 Iggy was in from out of town.  Both he and Alex, the studio's second cameraman and model, were natives of Colombia.  They had met on social media.  A trip to visit family in the metropolitan area provided an opportunity to meet in person.

Iggy had first encountered Alex, online, as a model.  When a chance to attend one of Alex's photo sessions morphed into an opportunity to try modeling himself, he agreed to take a shot at it.  Having a friend (and an experienced model) nearby eased the newbie's comfort level.

Having a friend nearby turned out to be not only a source of comfort but a source of inspiration as well. 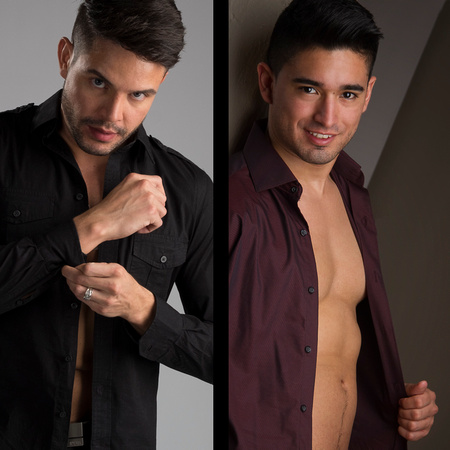 We were working in a studio that could easily accommodate two simultaneous photo sessions at opposite ends of its barnlike expanse.

Stephen Kahrs Photography and New Manhattan Studios were sharing the models as well as the space.  Operating independently, the photographers staged their own lighting and sets and directed the models.  At halftime, the models switched sides of the room.

While the models were taking direction from the photographers it was clear that their attention was wondering. In time, they were watching each other as intently as they were staring into the eye of the cameras trained on them.  As the models began mimicking, teasing and posing for each other, an unexpected dynamic took charge and gradually fused the two sessions. 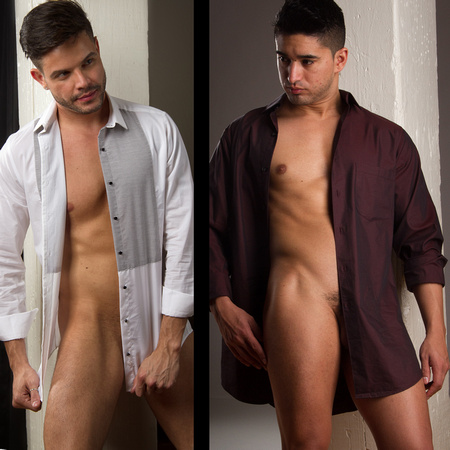 Standoff similarly merges the work of two photographers into a compelling photo essay of two models.  It documents this unique session as two models face off on opposite sides of the studio and start slowly disrobing for the cameras and each other.  The 64-page photo essay is NSFW.  Standoff contains work by both Stephen Kahrs Photography and New Manhattan Studios.  Click here to preview and order.

Postscript:  This was not Iggy's last modeling session.  It was his first.  He returned home to whip himself into top physical shape and quickly launched a successful modeling career.

*Standoff is one of several recent publishing projects inspired by Covid-induced free time.  Lacking new models, we have been reexamining archived folders for previously-unpublished work deserving of attention.  When we reordered and paired photos from two photographers cameras we discovered a new way to appreciate what we had captured one afternoon a few years back.