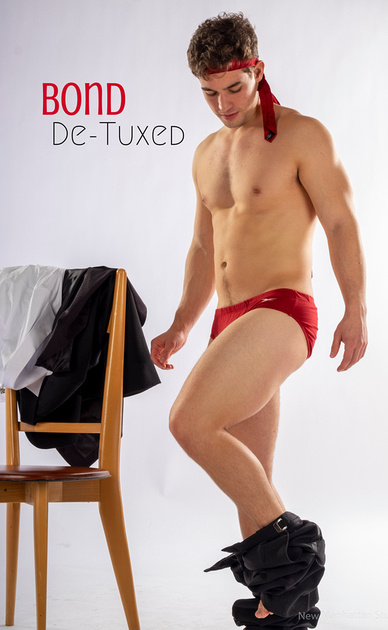 For a 2015 Valentine's-themed feature on Favorite Hunks, we released a set of photos under the title The Last New York Session.  By the time the first images became public, the model had already moved to California.  When prompted recently by Tye Briggs of Favorite Hunks to see if there were any unprocessed shots from the session that he could use for the bright red holiday this year, I revisited the folder for the first time in five years.
It had been one of the Bond's earliest sessions.  He was still relatively green as a model and his slowly-budding self-confidence was just starting to become evident on camera.
We had shot demure art nudes in the studio and had included Bond in a trio of models shot bare-assed around barns and horses but a Valentine's-themed, erotic shoot was new territory.  Five years later I recall the conversation in the dressing room, prepping for the session.  Suspecting that I was far more familiar with male erotica than he, I was prepared to show him examples on the tablet.  I pointed out that men posing in the nude are posing for posterity and most want to look as virile and manly as possible.
He glanced at no more than two or three photos on the tablet and responded, "Got it."  End of discussion.  We headed into the studio.

It turned out to be one slow, intense strip-tease of a modeling session.  As he shed his clothes, modestly teasing the camera, his attitude became more playful.  As his confidence built, so did his courage.  Natural stage fright subsided and he started easing into the roll of Bond, dashing, international sex symbol. When the pants finally fell, it was obvious that he had understood the intent of our brief conversation in the dressing room.
The spirit of the session is well-captured in the video presentation (below, right) that was prepared for FH 5 years ago.  Engaging with the camera, sexy and playful, the Bond story really begins here.

A small number of images had been published in Bond:  Private Portfolio, but in the process of culling the collection a second time, I realized that there was more than enough unseen work to warrant creating a photo essay.   Bond/De-Tux serves as a nice bookend to Bond/Manhattan, his concluding turn before the cameras as Bond, four years later.
Bond/De-Tux is a 40-page photo essay featuring previously-unpublished photos of young Bond.  It is available as a print magazine or as an instantly-downloadable PDF.  It joins several other publications featuring the Bond Brown, all of which can be found here.
It was not the last New York session.  Bond went on to work with us 9 more times...in California, Florida and New York.  I recognize him as one of my muses; one of the two models who have greatly influenced the studio's work.
It's a modeling name, of course, allowing one to step outside his normal, everyday self.   In retrospect, I now recognize this particular shoot as the session where Bond came onto his own as a male model, spinning his personal fantasies as his viewers spun theirs.  Here started his signature tease.  He would perfect it well over the next 4 years.  Bond fans will enjoy this new look back.
Keywords: art nude, Bond, male model, new model, nude, physique, torso
« Previous Post Next Post »