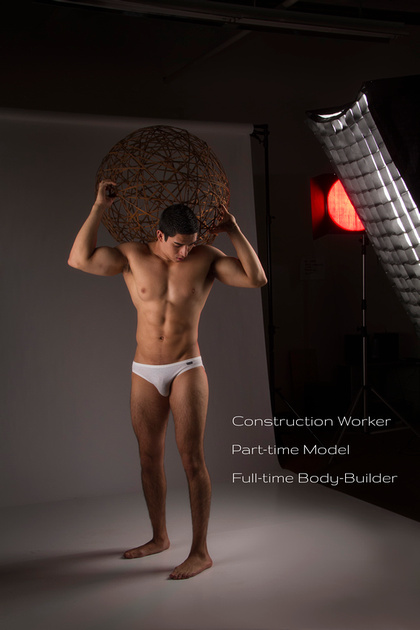 Of the 100+ models that have passed through the studio, Ricardo possesses one of the most impressive physiques.  Among the body-builders in the portfolio, he dominates in sheer size.  This is a big man with a powerful torso; beautifully-sculpted from hours in the gym.  Standing just under six feet, everything is in perfect proportion.  His is a classic body you would expect to find on a Roman coin and aficionados of the macho Latin male physique will appreciate the studio's latest photo essay.

Ricardo/Stormy was born of two photo sessions, a few months apart.  Both sessions were captured on cold, stormy nights.  Ineed the outside weather was the inspiration for wetting down the model to bring the drizzling night in the studio.  Photos from that series were featured in "A Dark & Stormy Night" in Captured Shadows #3.  This new photo essay features new art from that series as well as many additional images from both of the sessions.

Assisting at the sessions were the model's older brother, Alex (the studio's assistant and second cameraman), and David, the friend who lent the studio a valuable piece of art used in the shoot.  After supervising the transit and placement of the metal ball sculpture, David was fortunately free to take on the assignment of keeping the model wet, since Alex leaves the set while his kid brother is modeling.

The young body-builder, a construction worker by day, strikes some classic physique poses as he tries out male modeling.  For him it's as a means of paying off all the hard work in the gym.  For those who appreciate the body beautiful, it is a special treat.  Ricardo/Stormy is 36 pages long and definitely NSFW.