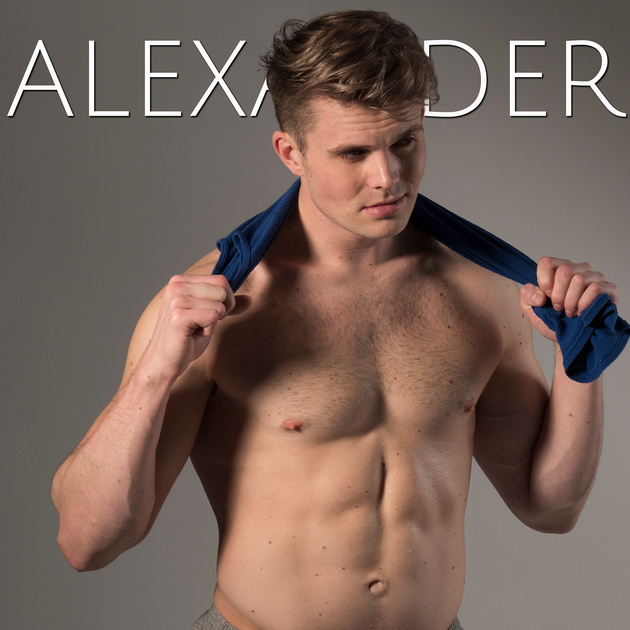 Once again we have a dancer on the paper.  With a portfolio of more than 100 models, it's inevitable that, there would be more than one model with the same name.  We have three Michaels, three Gabriels, and now, five Alexanders.  Starting with our long-time model, muse and assistant, Alex, we added the Ukrainian "Oleks," followed by the Dominican Alejandro and now a very American Alexander.  The fifth Alex in the port asked to be identified with his online moniker "Straus" and we were happy to comply.

Alexander's was one of our last pre-pandemic sessions and, as with Grant's session, we consider the work to be only half done.  We have held off editing and releasing his work with the expectation that we would be bringing him back into the studio to finish what we had started.  Unfortunately Covid-19 has had other plans.  Other than some socially-distanced shooting on Fire Island at the end of the summer, the studio's operations have been closed since March.

At some point in the future we hope to bring both Alexander and Grant back into the studio, but it's increasingly obvious that we are many months out from managing such a feat.  It's time to share what we have already captured with this striking model.

Alexander is a classically-trained, professional dancer.  He had just finished a production of The Nutcracker when we worked together last winter.  In the best of times, dance is a a challenging, competitive profession with limited opportunities for regular work.  Like most performers, dancers string together a life of gigs, forever grabbing at fleeting jobs.  As with all of the performing arts, the pandemic has devastated the profession.  In a cruel twist, the "plan B" employment option for many New York dancers, working as waiters and bartenders, has been equally obliterated.  The pandemic has demanded a pound of flesh from all of us.  We are all paying differently, but paying a price nonetheless, in diminished hopes, expectations and opportunities.  I can hardly complain about the inability to bring models into a studio while so many others are paying far greater prices.

There's an unusual degree of similarity in the studio shots from this session.  Expecting to round it out with a session outdoors or in ambient light, we were playing with using the studio's walls and reflectors as components of the compositions.  Pay attention and you'll detect the white sides of the studio's V-flats as background elements.  We look forward to adding some variety to the work as soon as we get the necessary go-ahead from the Center for Disease Control.  Until then, check out Alexander's work with the studio here.