Stonewall Was a Riot 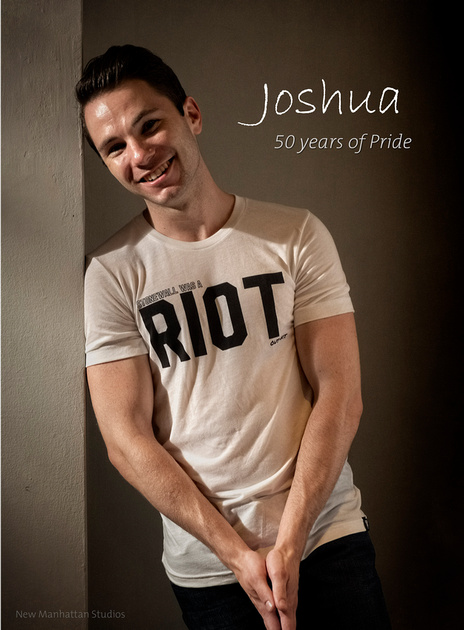 Joshua was one of two models that I shot on my birthday.  It was more than a red-letter day for me though.  The month was a long celebration of Pride in New York and the week ended on the 50th anniversary of the Stonewall Riots in Greenwich Village.

The city was awash in rainbow flags.  Storefronts and windows of coffee shops, major national retailers, hotels and banks were all sporting celebratory banners and welcoming messages for tens of thousands of visitors from all over the world arriving for World Pride 2019/Stonewall 50 and a month of celebration.  Bathed in colored lights, the Empire State Building stood as a rainbow-hued exclamation point at night.  Down in Washington Square Park, a short 3 blocks from the Stonewall Inn, the Square's iconic arch was meticulously painted in bright bands of red, yellow, orange, blue, green and purple light.  With its banners welcoming the world, New York University, surrounding the Square, took proud ownership of Stonewall's history--history virtually on its sprawling urban campus.

Joshua impressed me by showing up for his photo session in a shirt that used a double entendre to commemorate the events of fifty years ago.  Its message seemed to be aimed at his generation. The celebrations of 2019 were joyous, loud and prideful.  While we were enjoying a riotously grand time at this year's activities, it was lost on many that we were marking the anniversary of what had been an honest-to-goodness riot in 1969.

Those of us who were in the city in 1969 (I was a recently-arrived student from California), do not need to be reminded that Stonewall had been a bloody confrontation between the police and the nascent gay community. The Stonewall Inn, a seedy mafia-owned bar in Greenwich Village, was a known gathering point for "homosexuals and other deviants." Frequented largely by closeted older gay men and young hustlers, runaways, and faceless queer youths, it was a frequent target of police raids. 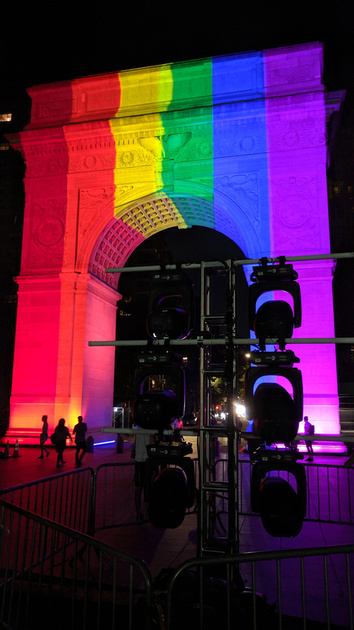 The specifics as to what exactly ignited the disturbances that night has been the subject of much discussion over the years and it's now hard to separate fact from legend.  The Gay Rights movement that was born that night quickly became the province of middle class white males.  Indeed, most of the early history of the gay rights movement in New York was written by activists drawn from the city's professional and creative classes.  Lost in the shuffle has been an appreciation of the fact that the intrepid souls who set spark to the movement were the most marginalized members of the community.  When the closeted gay businessmen fled the bar, it was the hustlers, effeminate "Nellie boys" and youths of color who were the ones who took up arms [or stones] against the police that night.

Joshua was a great model.  We were lucky to get him into the studio in late June before the young actor left town for weeks of performances in summer stock in theaters in the Adirondacks.  He was one of two models that we shot that day.  Both will be remembered fondly but only one will be remembered for his wardrobe choices. 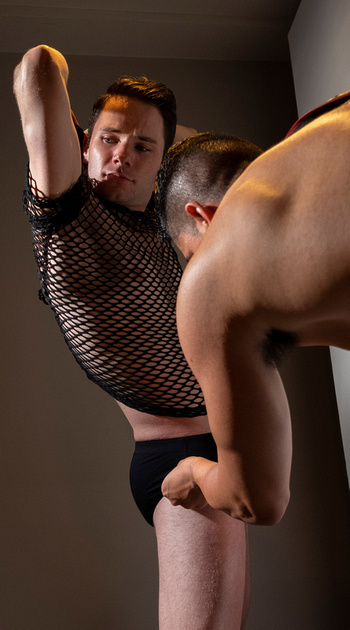 Joshua's T-shirt hit precisely the right notes with me and I was happy to start his session with it front-and-center.  In the midst of all the raucous and well-earned celebrations of Stonewall 50 and our accomplishments since, it was good to be reminded that Stonewall had been a bloody confrontation with the police and of how much we owe to an unlikely handful of misfits who went to jail that night.  Those who first stood up for our rights, who had the audacity to fight the New York City Police Department, were literally those with the least to lose:  the most marginalized members of our own community.

The euphoria of Stonewall 50 has faded but let us not forget what we owe to those brave young men and women who first confronted authority and fought back in the name of justice and a future that was inconceivably brighter than they could have imagined.

Joshua was great fun in the studio and kept mugging for the camera as only a trained actor can.  We captured several distinct sets in the session and we have uploaded two galleries for Joshua, one in full color, the other filled with black-and-white images.