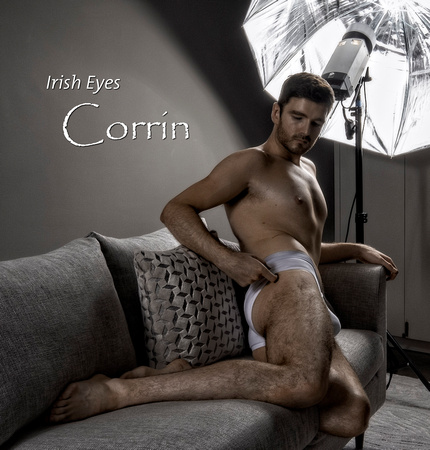 It's tempting, of course, to follow the words "Irish Eyes" with "are smiling," and indeed, Corrin's did.  But they did more than smile.  Actor that he is, Corrin wasn't mugging for the cameras as much as he was striking pose after pose after pose.  We were able to snag time for a session with him on his recent stint in New York.

This is another big man.  From every angle, Corrin's hulking presence and supersized body was a reminder of the tighter quarters that we now work in.  But he fit—yards-long legs and all—as you can see in his galleries below.

Corrin needed little direction.  He regularly moved on to the next pose as soon as the strobes fired.  He has the capacity to change characters with the crook of his eyebrow, making it entertaining to work with all of him.  At the end of the session, we noticed that we had spent an inordinate amount of time on headshots and have, accordingly, devoted a separate folder in Corrin's gallery just for them.

This Irishman is one of the many international models that have passed through the studio in recent months.  To keep things balanced, we're adding a couple of all-American boys from the midwest.  If you follow us, you've seen our work with Joshua on our Instagram feed.  He's up next.