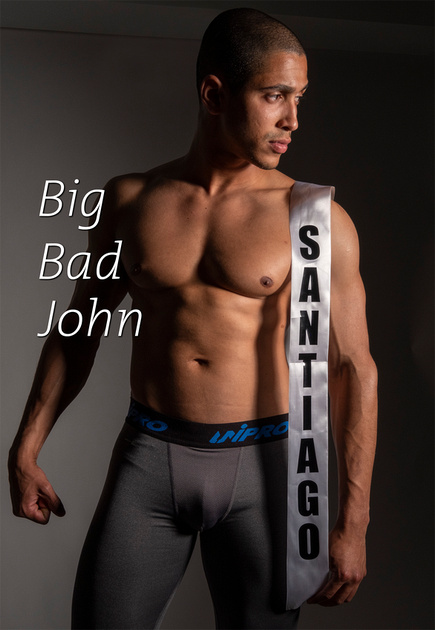 Working with John, I couldn't help but think of the classic Jimmy Dean ballad.  At six foot tall and with a powerhouse build, this 23-year-old could easily play the part of the coal miner hero in the saga of Big Bad John.  Photographing his back, I could see him braced against the falling timbers of the mineshaft as his fellow miners escaped from the collapsing mine.

John's backstory isn't quite as mysterious as that in the ballad.   He is one of three Dominican models that have passed through the studio in the past few months. Now a resident of New York City, John holds the title of Mr. Santiago and is representing his home town in the Misters of the Dominican Republic contest.

And bad, he isn't.  He's a local student who obviously spends a good chunk of his time in the gym.  Check out John's gallery here to appreciate how big, if not bad, he is.

We don't want to leave you thinking we see an ending for the Dominican Big Bad John that is as fatally heroic as that in the saga.  But don't get too bummed out by the lyrics and be mindful of the second song in the triology, The Cajun Queen, about John's true love who brings him back to life and a happy ending.