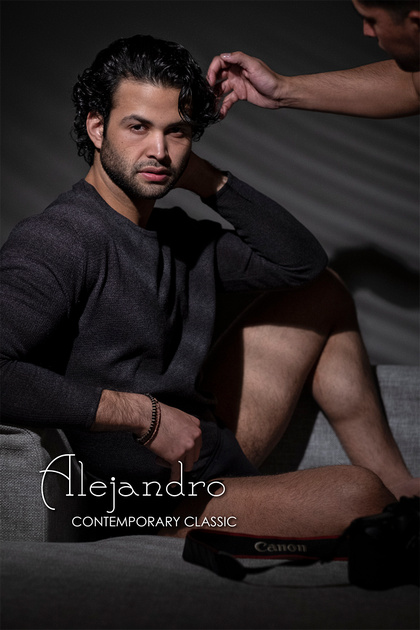 Alejandro is the first of four Dominican models who have passed through the studio this year.  It is not entirely uncoincidental that he was followed by Rodney and John.  They don't know each other, but they are connected through a pageant in the Dominican community.  It was only after we met him that we learned Alejandro was the reigning title holder for the Dominican Republic in the Misters of Kings contest.

That Alejandro holds such a title is understandable.  A commercial and runway model in the Dominican Republic and New York, he's everyone's definition of tall, dark and handsome.  He also has a look that is classic; stirring images from Greek mythology and evoking heroes of gladiator movies.  The hair is certainly a defining feature and the camera loves it.

We covered quite a bit of ground in our session with Alejandro--wet hair and dry--and you can find much of it in his gallery.  More will be added over time as we continue to edit and process images for a variety of uses and reasons.  Further, there were a couple of set-ups and ideas we tried that warrant further development in a follow-up session that we hope to have with Alejandro in the near future.

June will be a busy month in New York and for the studio.  We are involved in a major World Pride project with the make-up artist/body-painter, Charles Zambrano, and six rainbow-colored models.  We have two new photographers providing fresh perspectives of our sessions and two more Dominican models are about to pop up on the website.  Three new models are on deck and finally, with his reign recently over and schedules permitting, Alejandro will be returning as well.

To borrow a phrase, watch this space.

You can also see the first edits from all of our sessions on our Instagram account (@newmanhattanstudios) and to learn about updates to the site, subscribe to the blog as an RSS feed using the button below.