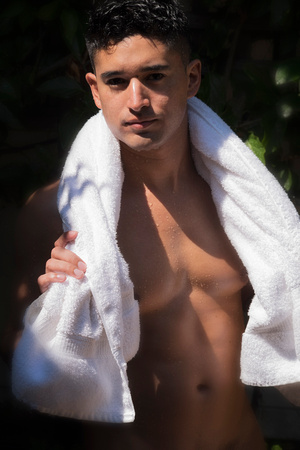 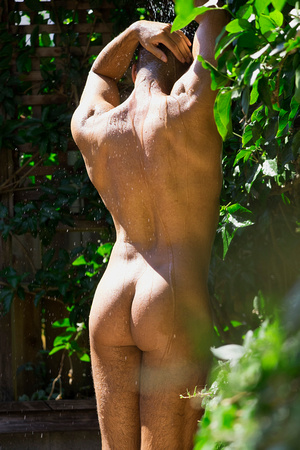 Over the years the studio has regularly scheduled photo sessions across Northern California, my native land.  Alex, as our stylist/assistant/second photographer, has participated in many of the trips.  He has been fortunate to be able to stay in a small flat owned by friends of the studio.  Tucked away on a side street in San Francisco's fabled Castro District, it has been a perfect vacation hideaway for a 20-something model from New York.  Walking from the flat to a nearby restaurant, minutes into his very first stay, he quickly began to sense the possibilities.  In the early days of Grindr, the phone in his back pocket started vibrating like an out-of-control dildo as he walked toward the Castro.

The flat has been a boon for photographers, too.  The soft ambient light in the all-white space is like working inside a softbox.  It is unsurpassed on a sunny afternoon, enveloping models in a warm golden bath of direct and reflected light.  As glorious as the main room is, the garden in the back is even better.  Trellises and a covered arbor give shape to a quiet green space, complete with ivy, bird-of-paradise, bougainvillea, stone tiles, falling water, and wind chimes.  In a pool of light is an outdoor shower.

September is summer in San Francisco and on a cloudless midweek afternoon, the hidden garden exudes serenity in fifty shades of green.  Secluded from prying eyes, neighbors quietly and invisibly go about their lives behind ivy, walls, and vines.   We worked uninterrupted by the distractions of the city all around us.  Until mid-way through the afternoon.  Suddenly the bliss of the garden was jarred by incessant shouting of children and the unmistakable cacophony of a schoolyard.  When we realized that the private day school next door had a playground on the other side of the wall, we scrambled, checking vines and wooden lathes for cracks and sightlines.  We found none, but it was disconcerting nonetheless to be doing this type of work with the sounds of children all around.

Alex, as usual, was unperturbed.  Today, he was the model, not the assistant.  One of two cameras trained on him was being shuttered by Wm Weyeneth, a west coast photographer and a Bay Area associate of New Manhattan Studios.  It was not Bill's first session with Alex, and this time out he captured more than half of the afternoon's best shots.

The resulting work has languished far too long as an unprocessed folder in the studio's archives.  As we finally open it to Alex's fans, we do so in fitting fashion.  As well as opening Alex's first new gallery in a couple of years, we have chosen three dozen of the best shots of the day for a new photo essay, Secret Garden.  We culled the collection down once more to post a dozen new art nudes in the Art Prints galleries.

Having been an employee of the studio since his early modeling days, Alex holds the distinction of having been photographed more than any other model in the studio's portfolio.  By far.  (We've lost track of how many times, at the last minute, he stepped onto paper that had been rented for another model who had flaked.)  Not to overwhelm the site with our work with one model, we have held back many sessions that beautifully document his changing physique and appearance over the years.  In time, more will follow.

Meanwhile, you can find all of Alex's work with the studio here, including five publications, art prints and additional video presentations of his sessions.  Be sure to check out the new art nudes in the Art Prints gallery.  (A note for our new visitors:  by agreement with our models, NMS does not post explicit photographs online.  Digital fig leaves are used when we post explicit images in the Art Prints gallery.  All such distortions are removed when images are sold as prints or published in our books and magazines.) 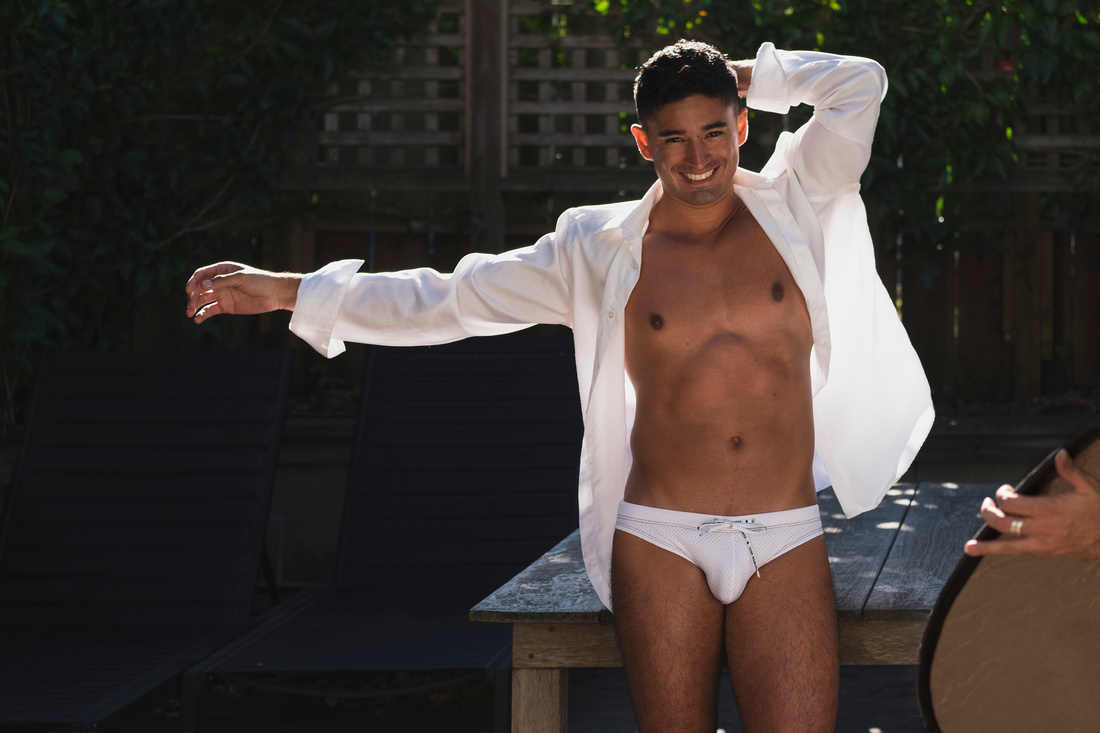