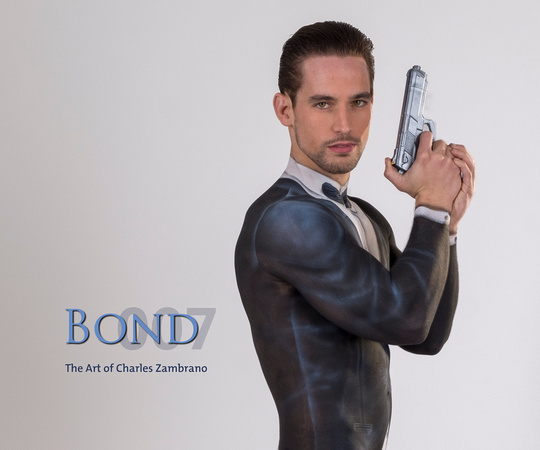 It is time to fill a promise, made months ago, to share the behind-the-scenes story of a dual photo session with Bond.  It came at the end of a long winter weekend he spent in New York.

Bond was in from Southern California.  After four years of talking about it, we were finally doing the fantasy photoshoot that we’d discussed for years:  shooting Bond as the secret agent.  It was months in the planning.

Bond was determined to deliver the “sexiest and buffest” Bond yet.  He was adhering to a rigid diet and a demanding workout schedule.   But as he approached the end of grad school, he began to realize that he likely wouldn’t be able to keep up this workout regimen once he was in the full-time workforce.  When the model said he wanted to end on a high note, we agreed that this might be his last modeling session.  We were both determined to make it his best and most memorable.

In the 4 years that we had discussed the secret agent session, not once was any thought given to executing the 007 concept in body paint.  However, when the artist Charles Zambrano agreed to work the weekend-long Bond photo shoot, we realized that painting him as 007 would indeed, be a memorable final session.  Charles is a professional stylist and makeup artist who is booked on film and television productions non-stop.  He rarely has time for a longtime creative passion:  body painting.  He is a master artist and scheduling a body painting session with him would be a coup for Bond.

When informed of the concept, Bond was all in.  I secured a large block of time in a studio space with shower facilities and started to think about ways to use the rental to my advantage while paint dried for hours.  I remembered Bond’s recommending a friend as a potential model.  It was a co-worker from his years in New York right after college.  We had talked a year before but he wasn’t ready to start modeling.  I was disappointed since Bond had said they were gym buddies and that Brendt had the most ripped body of anyone he knew.

When I reached out to Brendt to see if he might now be ready to try modeling, I was able to offer a potentially skittish first-time model the chance to have a friend present at his photo session.  I don’t remember if I got that far, however.  He was happy to hear that Bond was coming to town and eagerly accepted the chance to spend time with him.

Most models, like Bond, jump at the chance for a body painting session with only a vague awareness of all that it entails.  It is far more physically challenging than most realize.  It’s all done standing, with limbs extended for prolonged periods of time.  Depending on the concept, it can take hours and be both far more tedious and intimate than most anticipate.  Bond was a trooper, I knew he’d enjoy the experience.  Every model has. 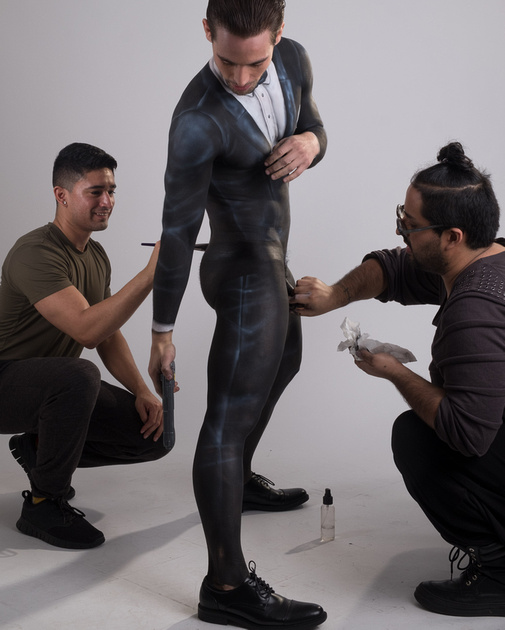 Bond was excited to hear that Brendt, his referral to the studio, would be having a modeling session co-incident with his.  They hadn’t seen each other in years and see each other they would.

I did not expect the cold space we encountered in the studio.  It was mid-February and we were in a 170-year-old townhouse that was long on history and charm and short on heat.  Alex, the studio’s second cameraman assisted on the shoot.  He had been present at Bond’s first shoot and they had remained friends over the years.

Bond and Charles set up shop around a space heater in the rear of the studio.  The painting was underway when Brendt arrived and was taken to the front of the studio, under the lights.  We were using strobes so standing on the paper between the bright lights didn’t offer any warmth for a model posing in various states of undress.  We joked that five bodies had to be heating the room but it was seriously cold for this type of work.

After 4 hours we were running out of time; Bond was leaving directly for the airport in an hour and needed to shower before departing.  He was marched onto the paper, artist and paint in tow.  Brendt didn’t expect to have a front-row seat for his friend’s photoshoot but, ushered into the shadows, that’s exactly where he found himself at the end of his own session.

The artist continued painting as Bond started getting into character, mugging with the gun.  In the final push to complete the job, the black briefs came off and Alex was deputized as an assistant to help cover the remaining blank skin with black paint as quickly as possible.

Charles continued sneaking onto the paper to tweak his artwork until we had all the shots we needed.  “Wrap” didn’t mean turning the cameras off, but in an instant the session pivoted from creating to destroying the art. 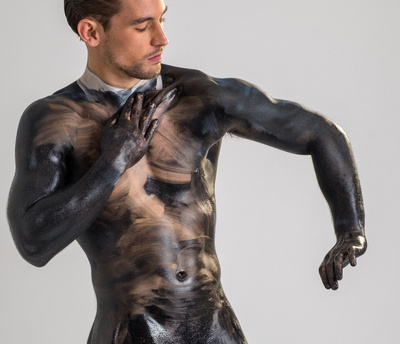 And in a strobe flash, Bond’s last photo session was over and he was off to the shower.

We were striking the set when, minutes later, a panicked call came out for help.  The clock was ticking and he couldn’t get the paint off his back.  His old friend Brendt was first to arrive to assist.

Twenty minutes after he stepped off the paper he was rushing out the door on the way to the airport.  Bond, the secret agent, had been captured on camera and in paint.  Mission Accomplished!

After four years, there wasn’t time for goodbyes.  The muse left the studio for the last time.