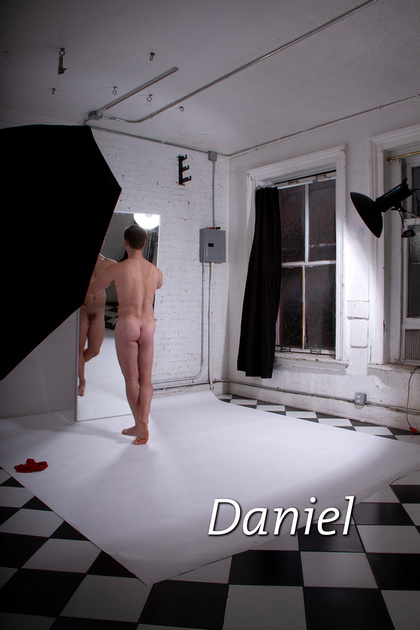 in the studio on the Bowery.  His session is notable as having been one of the coldest.

While a new studio space is being constructed to our specs, we currently work in a drafty old townhouse in one of the oldest parts of town.  Built before the Civil War, it's just off the Bowery, traditionally New York's skid row.  Neither the building nor the neighborhood were ever fashionable.  Until now.  Today, the Bowery is as chic a nabe as can be found, with trendy boutiques, bars, restaurants and clubs rivaling neighboring SoHo.

Over the years, the studio has operated in of a number of spaces. Interestingly, three of our four leases have been in historic buildings.  For several years we worked in spacious quarters in a converted cigar factory that was built in the late 1800s.  Then we did a stint in a Civil War-era rope factory on the Brooklyn waterfront (that today houses a complex of modern studios and offices).  Back in Manhattan, what our current spaces lack in size is made up for by ease of access (ever the New York City trade-off).  The fact that it has the quirkiest history off all is a freebie.

In Daniel's gallery you'll find several shots with a mirror, giving you a glimpse of three walls in the studio.  In its size (25' by 100') and general layout, this house isn't all that different from most New York City's townhouses, just much older.  The entire third floor is now an open studio space, as is a portion of the second floor. The well-worn floorboards on the staircase betray the house's age.  In a neighborhood with an abundance of "haunted houses" this one is a possible candidate.  Its most recent owner, a troubled soul, committed suicide.

The building's first floor is occupied by a boxing gym.  (That's a story for another time.)  Upstairs are two floors of studio space and offices.  Judging from the storefront and location, it's likely the ground floor was always a commercial space, probably that of the original owner whose living quarters were "above the store."  With its street views, the end of the third floor that you see here was probably once the master bedroom.

The mid-century black-and-white tiles were probably part of the decor when, after years on the run, Abbie Hoffman acquired the house.

The reformed Sixties radical and political activist sought a home for himself and his activist causes and friends.  This is what he could afford:  an old building in a seedy part of town.  It suited him well and even today much of the public space in the building is as he had it, with historic photos, political banners posters for long-ago events.

That's right, Daniel, you are standing in Abbie Hoffman's bedroom!

The FBI had tens of thousands of pages in its files on this anarchist who had been a founder of the radical Yippie Movement, a major anti-war activist who was arrested and convicted as part of the Chicago Seven (for plotting to disrupt the 1968 Democratic Convention).  In his later years, this was his base; he remained an activist and political organizer until his suicide at the age of 52.

The unfortunate soul died in bed, but not in this room.  The curtain came down on Hoffman's final act in New Hope, Pennsylvania.

It was a cold room the night of Daniel's session.  Whether it was the chilly breath of the departed or the lack of gas (which had been turned off as "a safety measure"), the frigid experience earned Daniel a second session in warmer weather.  This 20-something personal trainer is just the second Canadian in our portfolio. Work from both sessions has been combined in Daniel's Gallery.  We'll let you see if you can find the goosebumps that betray the first session.