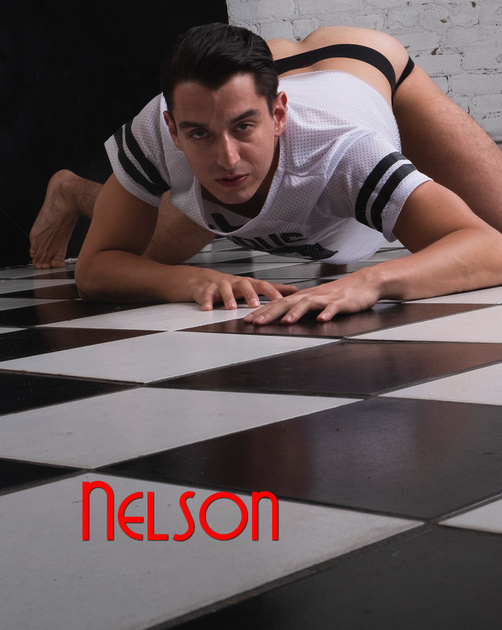 The variety of energy levels that models bring to their photo sessions is vast.  It's a reflection of their own, unique, idiosyncratic personalities.  At one end are the stoic, body-builder/statues that require constant direction and at the opposite end are the always-moving, bouncing-off-the-walls enthusiasts who need to be contained as well as captured.  Nelson fits comfortably at spirited end of the scale in a sweet spot that makes for a high-energy model who takes direction and enthusiastically goes with it.

At year end, it seems natural to be thinking both backward and forward.

Nelson was the last model that we shot in the studios on Bleeker Street. It was easy attracting models to the area on the trendy border of SoHo and NoHo.  For the non-New Yorkers, they are acronyms for South of Houston and North of Houston Street.  These downtown neighborhoods are among the trendiest parts of the city; littered with clubs, serious foodie destinations, boutiques, hotels and bistros, all powerful model magnets.

At the end of the year we have completed our move to new studio space in the Flatiron/Madison Square neighborhood, about twenty blocks uptown. The new space has been designed to our specifications and we have a long lease.  The studio may finally end its itinerant nature.

The plural in the studio's name could well refer to the dozen-or-so studio spaces represented in our portfolio.  Over the years the studio has rented or leased shared studio spaces across Manhattan, Queens and Brooklyn.  Some have been long-term leases, others more tactical and short-term in nature. We have enjoyed working in converted historic buildings, a 100-year-old cigar factory in Long Island City, a Civil War era rope factory along the Brooklyn waterfront.  We got our start in Manhattan in a studio in the Garment District and ended up in an historic house just off The Bowery.

We will begin shooting full-time in the new space in January.  Not only is it private, non-shared space (meaning we can book anytime!) but it is closer to home than any space we've previously used.  What may be lost in the "model appeal" of the neighborhood will be more than repaid by personal convenience.

And to kick the studio space into high-gear, Nelson and his boundless energy will be one of the first models we book in January.  Be watching for more Nelson and more publication releases.  Follow us on Instagram or subscribe to this blog (using the button below).