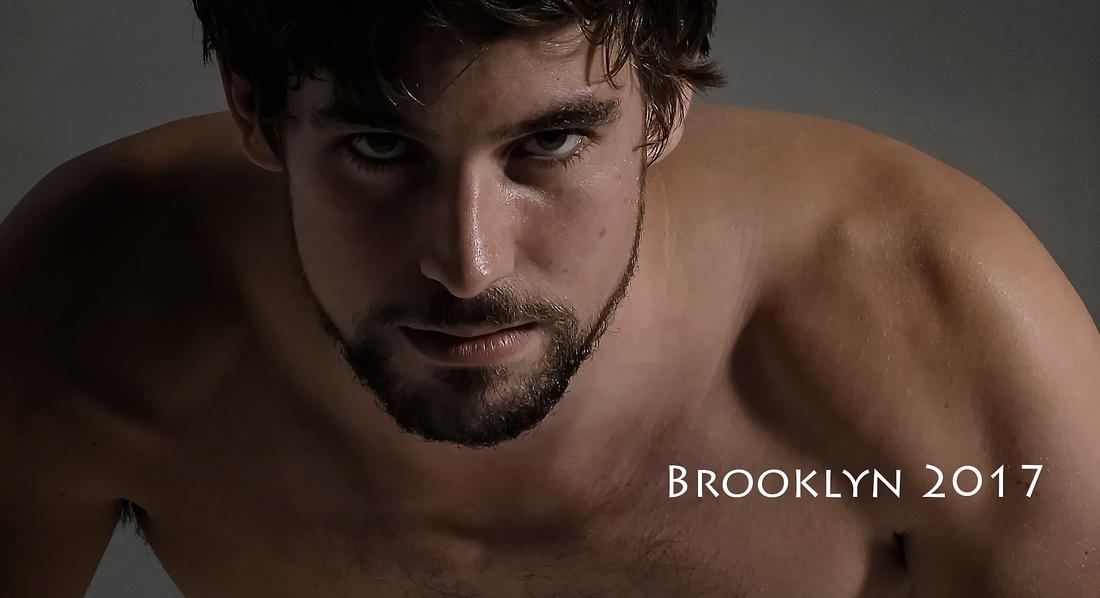 Summer on the Brooklyn waterfront.  It felt like we were back where we belonged.  For those just entering the conversation, since early 2014, this trio of photographers and models has logged thousands of miles, from coast to coast to coast (that would include Florida) capturing Bond Brown, one of the studio's most enduringly popular models, as he has matured from the kid next door into the confident fitness and physique model that locks gaze with you here.

Bond's role in the studio's life is probably best punctuated by the fact that he is the subject of the first entries in this blog.  The longitudinal study of the same subject over a period of time is a defining interest of the studio and Bond is one of several models whose physical development we have been privileged to be able to document over several years.  With this young man, the off-camera changes are as dramatic as those the camera has captured, but that's another story.  If you detect a growing sense of confidence in the photographs, then I have been true to my photojournalism roots. 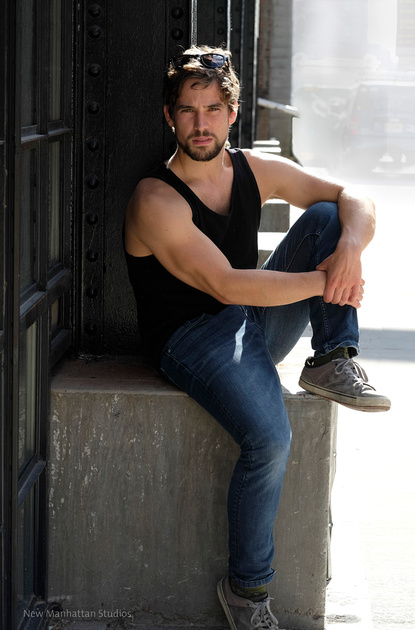 In mid-June we were on a Brooklyn pier jutting far out into the East River.  Gorgeous skies and a classic New York backdrop made for a perfect "welcome home" setting for this ex-New Yorker.  It was the polar opposite of our first session with Bond, the evening after the blizzard of 2014, when this native of Buffalo had diligently trekked through blocks of unplowed streets and sidewalks of record-setting snowfall to make it to his first professional photo shoot.  Fueled by such determination and his discovery of the rewards of modeling, in the space of six months, Bond became one of the studio's most popular models.  When he announced that he was moving West at the end of the first year we doubled down on our shooting schedule and had not one but three "last" New York photo sessions.

Bond is not a professional model; what had started as a lark for someone working as a busboy in a high-profile Manhattan restaurant turned into a rather heady experience.  With photos of him winning contests and his last New York photo session earning him the position of Valentine's Hunk for 2015 on FH [Favorite Hunks], Bond's move fortunately did not mean the end of his modeling career.  With introductions, he continued modeling with a select number of established fitness and physique photographers in California and New England.

The studio was fortunate to work with Bond twice in 2015; his first year in California, a year that I’m sure the model will never forget.  It included a beautiful home in San Francisco, lots of biking, hiking and exploring and occasional waiter-ing.  Published work with the athlete in his mid-20s in archetypal California settings can be found in Captured Shadows #1 – California Dreaming and Bond:  Private Portfolio II.

Reality bites, even in the Land of Oz.  Bond’s modeling career slowed to a halt at the end of that first carefree year as he doubled and tripled down on work to save money to return to school.  In 2016, grad school took him to Southern California where he found a bit more time to hit the gym.  He joined us as a non-modeling friend last year as we partied around our photo shoots in the Hollywood Hills.

In L.A. last year, Bond agreed to get into shape to return to modeling, “for just a few friends.”  We booked him almost immediately for his spring break and we met up in Florida in March for the first of what we hope to be three sessions this year.  The June session was captured as he passed through New York on his way to a family reunion in Iceland.  He explained that no one in the family was Icelandic, but they all thought it would be a cool place to meet up.  His relentless promotion of the island in the far North Atlantic prompted me to schedule my own photographer's tour of Iceland just weeks after his visit. 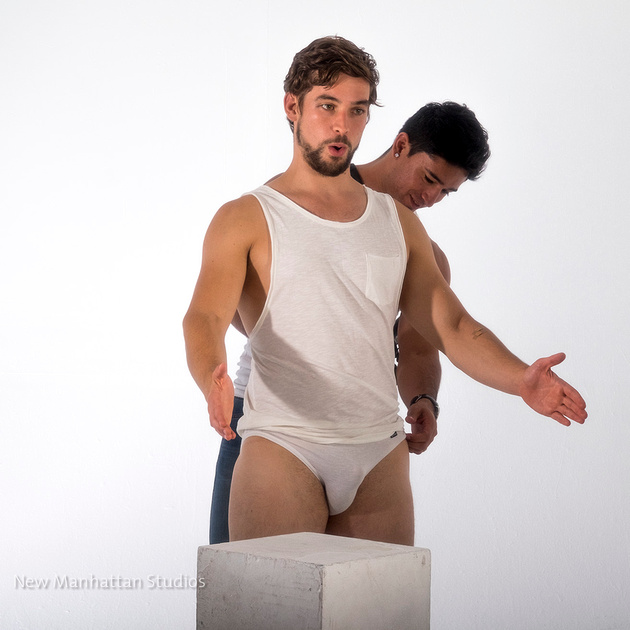 Beyond the staggering natural beauty of the island, I was struck by how popular and powerful the Viking image remains in this Nordic country.  Bearded Norse seamen are like mascots, they're everywhere; on book covers and huge advertising posters, on T-shirts and key chains.  I know it's an international look, but I was amused by how many young men seemed to be actively cultivating a Viking look with beards and rakishly shaggy hair.  It took me a few days to realize that this was more than a cultural statement.  With one of the most isolated and insular gene pools on the planet, the very twenty-first century men of Iceland are the direct decedents of the real thing:  Vikings.

Bond arrived in Iceland two days after our photo shoot. With his facial hair exactly as you see it here, he must have slipped right into the 20-something street scene in Rekyavik.  The Brown family may not be Icelandic, but it strikes me as likely that there’s some Viking blood in there somewhere!  Just the thought adds a new dimension to Bond's interpretation of the dashing secret agent.

In addition to welcoming Bond back, the Studio welcomes a new set of hands to the NMS family.  In the picture below, Bond is surrounded by Alex, the studio’s assistant and second photographer (left) and Alex's friend Jorge Figueroa (right).  Jorge had joined us in California last year where he had assisted on several photo sessions in Hollywood.  Jorge and Bond had, well, bonded, in our off-hours last summer and Jorge, a New Yorker, changed his work schedule to meet up with his West Coast friend in June.  Not only was Jorge deputized to swing lights in the studio, he was handed a camera and several of the images in the new Bond gallery were taken by Jorge.  He quickly caught the knack of using the second camera to capture the model at play in the studio.  That's his capture (above, right) of a surprised Bond hitting a falsetto note as Alex adjusts his underwear.

Jorge will be getting specific credits when the work makes its way to Captured Shadows #5, as it will.  "When?"  Click on the "subscribe" button to follow the blog (as an RSS feed) and be the first kid on your block to get word of the publication date.  Meanwhile, check out Bond's new folder, Bond New York 2017.  Additional new art nude and physique art pictures have been placed in the Art Prints Galleries.

Click here for All Things Bond at New Manhattan Studios. 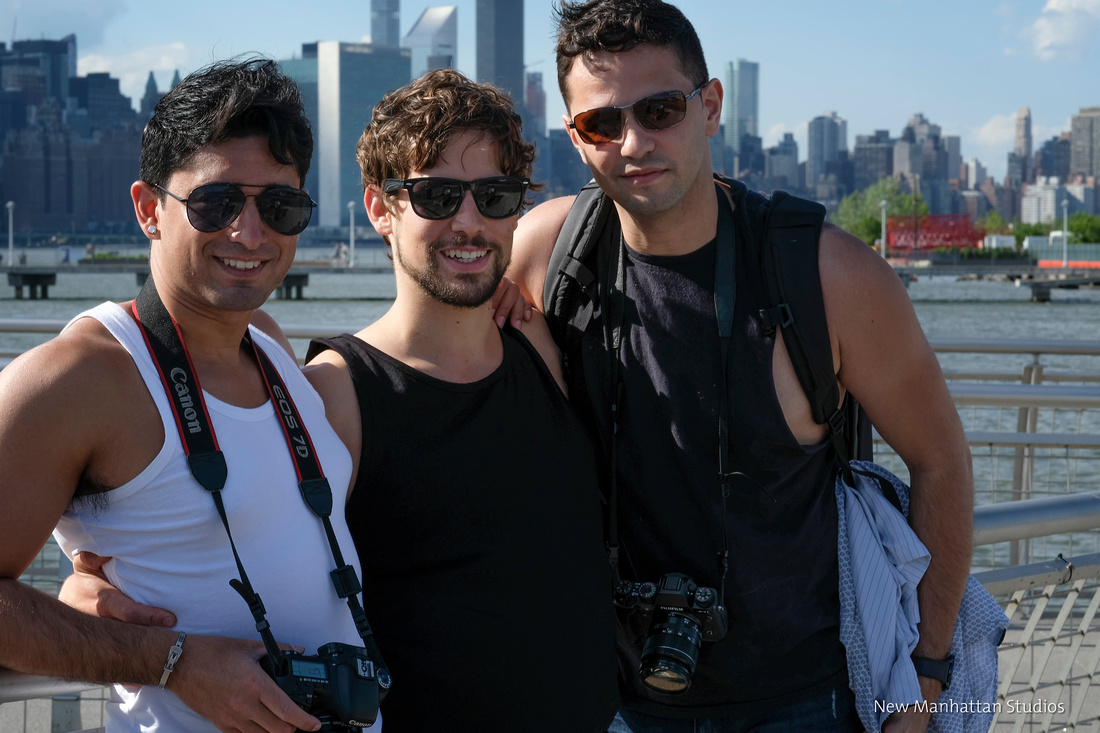