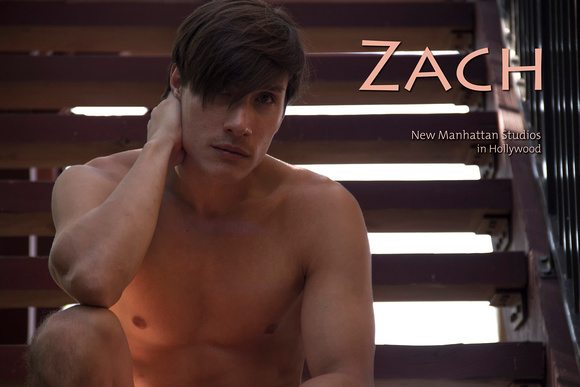 Zach was one of eight models that we captured on our most recent trip to California. Venturing beyond our usual base in the Bay Area, we added five days in Hollywood to the schedule. Over the course of ten days, four different NMS photographers took part in ten photo sessions for a future issue of Captured Shadows that will be focused exclusively on our California models.

Zach's session was our second in the large home in the Hollywood Hills. It was with Zach that we first explored the balconies and staircases. With an abundance of rooms, nooks, crannies and shooting angles, we hoped to shoot five models in various settings without repeating ourselves. Over the course of several models, the balcony rail reappears, but Zach owned the staircases, both of them. To the right, you'll see Alex's shot of him on the exterior stairs (above) and my shot of the two of them working (below).  Both 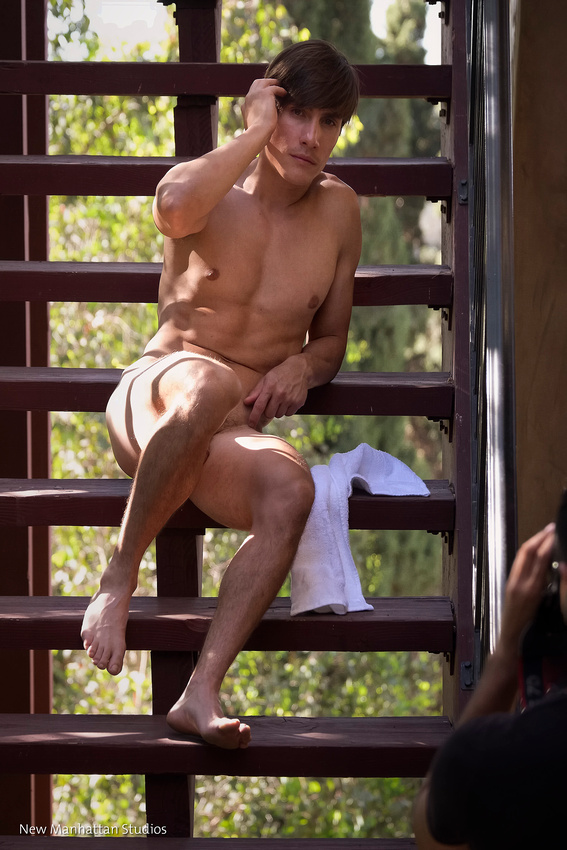 illustrate what a natural setting it was for his long, toned body.

We did some of our best work with Zach on the balcony and stairs and some of these shots are among our favorite images of the entire trip. This toned athlete, actor and experienced model stretched, curled, extended and bended into striking poses on a sunset-facing balcony with a sweeping view that included Studio City, the San Fernando Valley and the Hollywood Freeway, zipping past just below us on the hillside.  That the view was two-way didn't bother Zach or, for that matter, any of the other models who worked in the space that week.

In addition to eight models, we were joined by two West Coast affliates/partners/friends, fellow photographers, Wm Weyeneth and Keith Ingram.  Wm worked with us on a new session with Andrew in a garden apartment in San Francisco's Castro District. (We last worked with Andrew in the hills above Santa Cruz two years ago.)  Bay Area photographer Keith Ingram flew down to Los Angeles for the second half of our sessions in Hollywood.  Portions of the work with all models and all photographers will be appearing in the upcoming California issue of Captured Shadows.

You can find Zach's gallery here.  Additional images of Zach can be found in the Art Prints galleries here.  You can follow Zach on Instagram here.  (And while you're on Instagram, check out the studio's feed here, it's the first place you'll see previews of our newest work.)

The California Issue of Captured Shadows will be published in late fall of 2017, along with a parallel issue devoted to our east coast models.