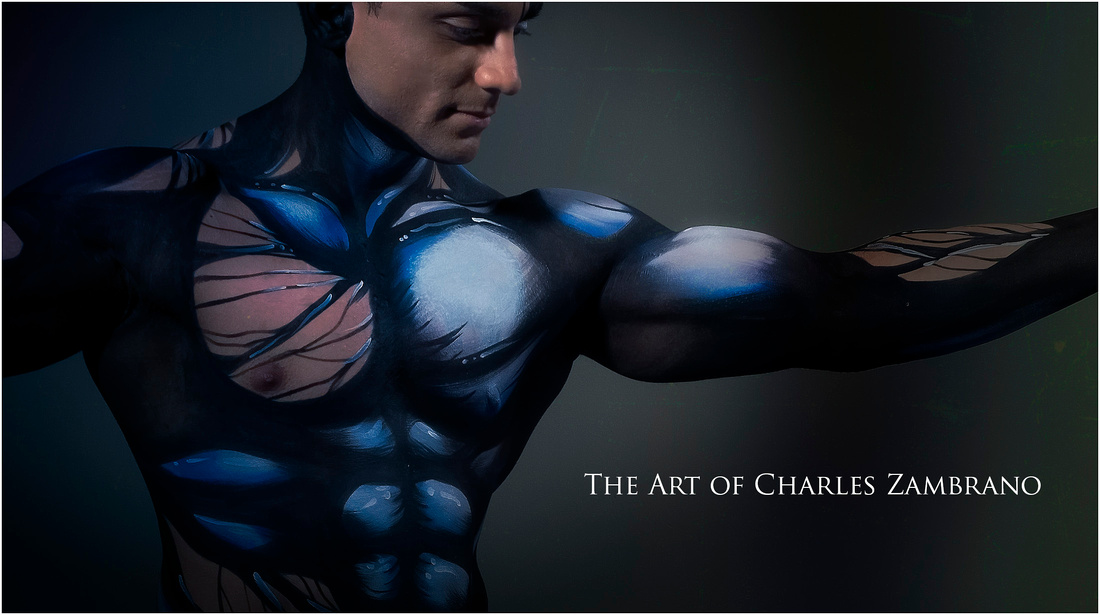 When Norm heard that he could become the action hero of his choice, he was all in for a body painting session with the artist Charles Zambrano.  In a New York minute, he chose the super villain Venom, a Marvel Comics character from the Spider-Man series.  Norm had started with the studio having just turned 19.  This was to be his eighth and possibly last photo session with the studio.  He had met us as a gym buddy of the studio's assistant, Alex.  Now 21, he was moving out of the area pursuing a job opportunity.

I was pleased that Norm had accepted the challenge to do a body painting session.  It is not work for everyone.  Depending on the design, it can be a very intimate experience and it will invariably be a long process that requires standing most of the time, at times with limbs extended for minutes on end.  I suspect Norm didn't know exactly what he was getting into.  Most models don't. 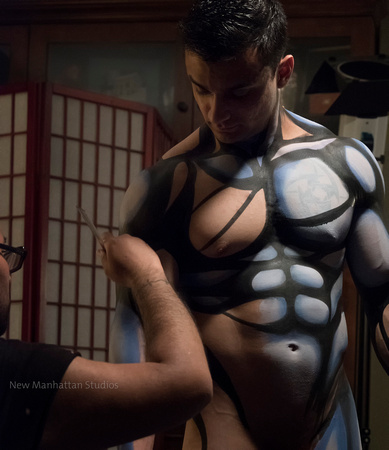 The artist took the symbiote as his inspiration and embarked on a painstakingly detailed re-imagining of Norm's torso as the host of a symbiotic partner.   We have worked with Charles four times now but this was the first time I had the un-interupted time to document the process from start to finish.  As I watched the application of each stroke I marveled at the mastery of the makeup artist.

It's rare to encounter an artist as successful as Charles at leveraging his artistic talents and interests into a rewarding livelihood.  He is a trained artist who finds financially and artistically rewarding work in the studios, stages and runways of New York City. Charles is one of the wizards behind the magic and beauty we encounter on Broadway, Madison Avenue, film and television.

I felt privileged to be documenting the artist and model at work.  Although there were three of us in the room, it was generally quiet with music selected by the artist softly playing in the background.  Each one of us were intently involved in our own aspect of the artistic endeavor.

In many ways, I find the photographs of the process as interesting as the photos of the finished product.  I'll trace that back to my roots as a photojournalist. Judge for yourself, check out the behind-the-scenes shots in the Creating Venom gallery.   If they pique your curiosity, check out our photo essay Creating Venom for 56 NSFW pages of the process and finished art.

After 4½ hours, the last stroke was applied.  The model stepped in front of the camera.  Venom.  Hosted by Norm.  Conceived by Charles Zambrano.

After seven photo sessions, it was as if we'd saved the best for last.  As I tweaked camera settings, Norm struck poses.  By the time I was ready to start shooting the model was clearly in character.  When the strobes started popping, the model came to life as I've never seen him before.  The dude was seriously into his character and quite possibly living out a fantasy life he'd nurtured since his preteen years.

I'm not a comics afficionado; this villain's name meant nothing to me.  But Charles' art and Norm's characterization brought Venom to life for me in a seriously evil way.  I never expected Norm to be able to pull off a villain, so I was caught unawares by the brooding, sinister and a taunting maliciousness that was confronting me.  We leave it to the viewer to decide if our collective artistry has brought forth a worthy character and body of art. 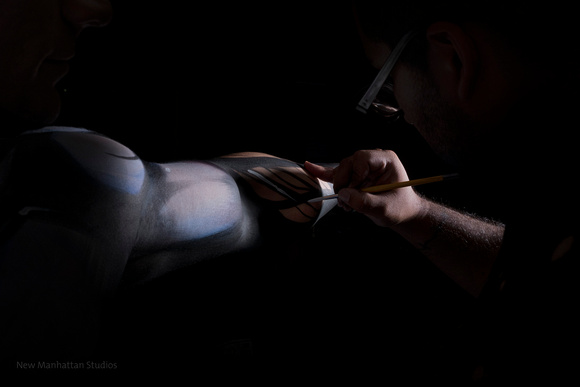 A gallery with the finished work has been opened in the special galleries section the Fine Arts Galleries, alongside a second gallery with the behind-the-scenes shots from the body painting session.

Our earlier work with Charles Zambrano can be found here.  You can see more of his work here. You can also follow Charles on Instagram.

And while we saved the best for last as far as Norm is concerned, we think we saved the best for last for his fans.  Our seventh session, captured just one week earlier, shows this 21-year-old man-about-town on the streets of Manhattan.  In a few more weeks we'll be opening what may be the last Norm gallery for a while.  Watch for Summer in the City.  Featuring Norm.  Coming soon.  Here.