Gabriel the Third. The Brazilian 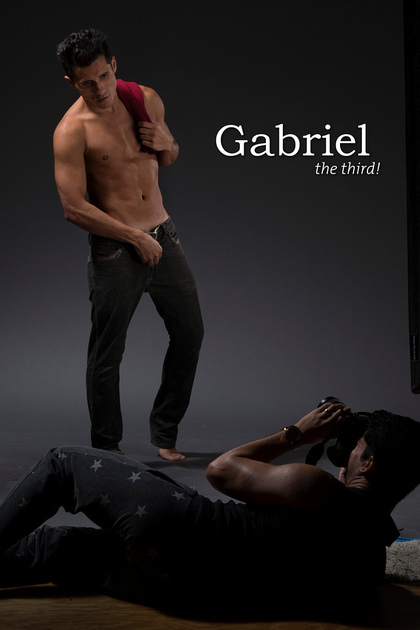 Gabriel was one of those ships that pass in a very contemporary night.  It was a pleasant and productive winter evening, to be sure, but a fleeting moment when Rio and New York City intersected. . .an international meeting, born of social media, manifesting itself in the studio.

Our correspondence had begun about three months earlier, when Gabriel, a Brazilian fitness model planning a trip to the United States, wrote to arrange for a physique portfolio session while in New York at the start of his trip.

With a bit of a language barrier, our exchanges had been limited to the basics of scheduling and what he needed or wanted for his portfolio was unspecified beyond a physique and fitness session that would include implied or partial nudity.  After reviewing his portfolio we agreed and waited out a couple of months to see if the mid-twenties Brazilian model would be as fit as his online presence suggested.

Gabriel delivered.  Fit and trim, he was an established model who was at home in the studio.  The ambiguity of whether or not he would be posing nude was resolved shortly after we began shooting.  He had signed up for implied and partial nudity.  As he became comfortable with the work style of the studio it was a boundary that passed without comment and so naturally that I recognized it as a protective filter I've seen many models use:  meet the photographer first.

Half way through the session we had met his portfolio needs and we continued with some art nude work that more than met the studio's needs.  Or expectations.

At the end of the evening, I promised to deliver to Gabriel the set of portfolio shots that had been the initial purpose of the session.  Then I asked him to sign a model release and paid him the studio's modeling fee for an outstanding physique art session that generated images that will be appearing in upcoming issues of Captured Shadows.

Our real world missions fulfilled, the meeting ended and we reverted to our ongoing cyber relationship.  It's almost enough to inspire faith in the Internet.  Almost. 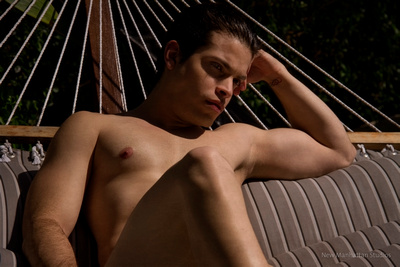 As we prepared to open Gabriel's Gallery (henceforth known as Gabriel 3), we were curious as to how much time had lapsed since the session with our first Gabriel, the Venezuelan actor and model (on the right).  Opening the long-dormant folder to read the date stamp on a raw file, we discovered our answer (3 years) and a number of previously-uncirculated images.  With fresh eyes we even found a couple of new RAW files to edit.

As a consequence, new photography has been added to Gabriel's gallery and to the "Recent Work" section of the Fine Art galleries.  There you will find his work next to Gabriel 3.  Caracas, meet Rio.  Last we heard, Gabriel 3 was home in Brazil, working as a chef and Gabriel 1 had escaped the chaos and turmoil that has engulfed Venezuela and was living in a land famous for welcoming refugees.  Canada.