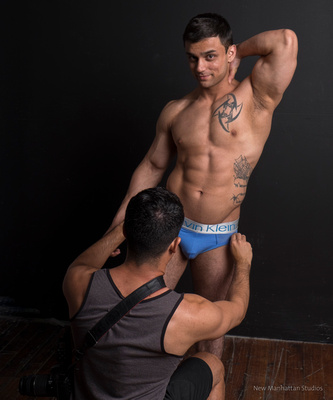 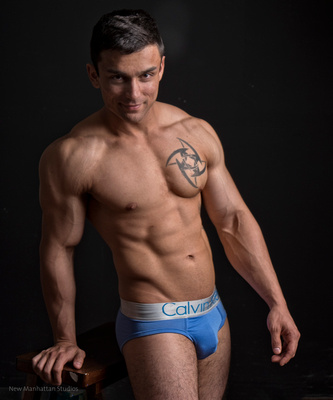 Few models have stood before our cameras more often than Norm but this may be the last chapter.  He first worked with us at the age of 18 when he followed his gym buddy to the studio.  Alex, the studio's stylist and second cameraman (left, lower), and Norm work out at the same gym in their hometown, just across the river from Manhattan.

Back in January, Norm was the first model we posted in 2017.  We've worked together three times over the past 12 months and it seems fitting that his will be the last work posted for the year as well.  Norm, hosting Venom (body-painting by the artist Charles Zambrano) was featured in July.  Work from two other two sessions, recently prepared for publication, is debuting in Norm's new 2017 Gallery.

We have long discussed working on the streets of New York, but despite living just 15 minutes away on the other side of Hudson River, Norm doesn't get into the city that often.  At a spring session in the studio, Norm announced his career plans and push came to shove.  The session on the sidewalks of Manhattan finally happened just days before the model moved out of the area.

Two-and-a-half years after his first tentative photo shoot at the age of 18, Norm is one of five New York models featured in Captured Shadows 5, New York Sessions.  Visiting his online galleries here at New Manhattan Studios, you can see the remarkable progress this young body-builder has made over the late-teen years that we've documented.  He has always had one of the most defined torsos of any model we've worked with and it's only gotten better.  For those who admire well-proportioned, chiseled torsos, Norm is the bull's eye.

It was quite a thrill for Norm to assume the persona of Venom, a long-revered comic book villain.  If working with the artist was his last turn in front of our cameras it was a fitting high note.  A few days later, now 21, he packed his bag and moved out of town, following employment opportunities and dreams.  We hope this isn't our last work with Norm.  He'll be home from time to time, but whether he'll have a chance to pop into the studio is an open question.  He's very much a young man getting on with his life and we wish him well.

Below is an outtake from Captured Shadows 5.  Check out all of Norm's work with the studio here.

New Manhattan Studios
Thank you for the kinds words. Encouragement is the best remuneration.
joshim(non-registered)
Just amazing post you have published . I appreciate your blog . Well-done for shared .
No comments posted.
Loading...