Bringing the Devil out in Timothy 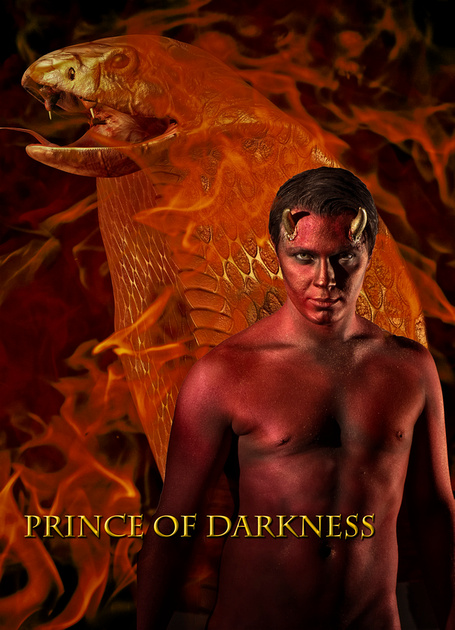 Blond and eminently capable of pulling off a preppy look, Timothy has long been one of the studio's most popular models. Our history goes back to 2013 when we worked with the 21-year-old actor/musician in his home state of Massachusetts.  His image (if not his character) is anything but diabolical, however, and it had been a while since he’d been in front of our cameras.  I had concluded that he was an unlikely candidate for the job when an opportunity to do some Halloween-themed art presented itself at the last possible moment.

I had less than 24 hours to secure a model for a second body-painting session that we were tacking on to one that was already planned for Alex, the studio’s model/photographer. The two sessions would now go late into the night.

Alex’s friend, Jorge, would be assisting on the set and I had inquired as to his interest in possibly modeling for the second session. This is paying work that requires a signed model release and interest aside, it is not work for everyone.  I was not sure if his personal situation allowed for him to appear on the Internet in partial or implied nude poses as the job required.

Less than 24 hours before the session, while waiting for word on Jorge’s interest and availability, I wound up texting with Tim. He and Alex have known each other for four years and we had been planning to have Tim arrive in the studio with pizza at the end of Alex’s session.  Knowing that my window on finding a model was closing, I decided to extend the offer to Tim as well. I had no reason to think that he’d accept it, but since he would be there anyway, I thought he’d enjoy the work if he could get past the intimidating hurdle of body painting.

To my surprise, Tim was the first of the two models to say yes to the offer.   I had shamelessly appealed to the actor in him by promoting the hand-crafted costume he’d be wearing.  That had its appeal, no doubt, but in the end I think it was the character rather than the costume that grabbed Tim’s imagination.  He would be playing the Prince of Darkness.  When he got back to me, he indicated his girlfriend was totally into the concept!

Having done eight body-painting sessions with the artist Charles Zambrano, I have now watched each and every one of the eight models get past their initial jitters to thoroughly enjoy their sessions.  Most fascinating to me, however, has been each’s reaction to the costume itself.  It fuels my interest in documenting the entire process, as well as the finished costume and character. 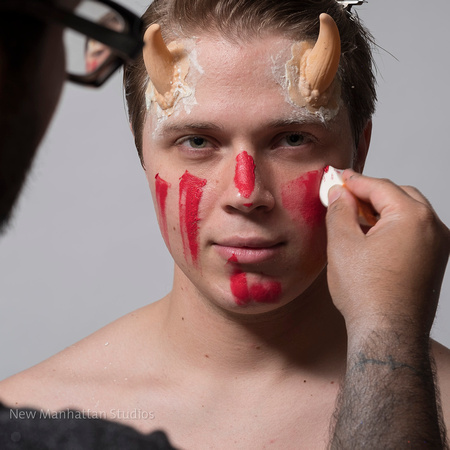 Costumes have amazing transformative powers.  Just put on a mask and you can get away with almost any out-of-character behavior.  In the studio I have watched even the stiffest and most stoic of models come to life in new personas that live as long as the masks.  Whether they are action heroes or mysterious aliens, the models get into character and perform for the camera in a manner that differs from their standard modeling sessions.  From most accounts, models enjoy these sessions more than any other.

But there is that initial hurdle.  I saw it on Tim’s face when he entered.  Alex was standing naked in the center of the room, painted from top to bottom.  Tim's mouth said hello, but the big gulp on his face said “What the f* did I get myself into?”

I don’t think he’d visualized the small crowd that would be attending his session nor, despite earlier correspondence and sample photos, the intimate nature of some of the work.  To his credit, Tim didn’t bolt for the door.  He did, however, head for some of the beer that was on hand for the pizza-party-now-working-dinner.

Finishing the pizza, it was Tim’s turn.  We stepped into a separate room where I promised again that I would not post any explicit content online and that despite his jitters I was confident that he’d have fun with the session.  He assured me that he completely trusted me to keep his junk off the internet, so why, he wanted to know, did it have to be painted as well.  I fumbled a photographer’s answer then punted by attributing the policy to the artist.  As Charles later explained it, I appreciated the logic of the rationale.  For the artist, it’s all about creating the illusion. Bringing the character to life requires painting the entire body as anything less breaks the illusion for both the viewer and for the model.

Still uneasy, Tim said that he trusted me and would not let me down.  I handed him a model release and a wrap; a few minutes (and texts) later he entered the room and sat down in his bright red towel.  Ready to start the transformation. 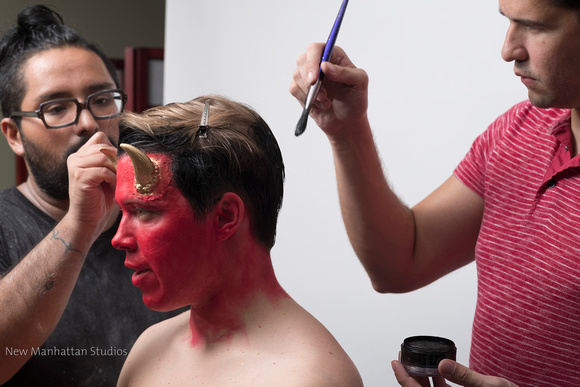 Jorge’s chance under the lights will come later.  For this session he was deputized as Charles’ assistant to speed a lengthy painting process that was starting late at night.  At least with five people in the room, what can otherwise be a quiet and tedious task of applying paint turned into something of a party.  Tim’s stage fright was precisely that.  Once the session began, a “this is work, but let’s have fun” mentality took over the room and, as expected, Tim relaxed and had fun with it all.  From early-on, he was texting selfies of the process to his girlfriend.

When the art was finally finished the long preparation yielded a photo session that lasted less than an hour (but still well into the wee hours of the morning).  The illusion was successful.  For a brief time we had the Prince of Darkness in our presence.  The red skin brought out some seriously sinister attitude.  The horns played to the model’s natural friendly combativeness and you had the impression that playing the devil came natural to the kid in Timothy. 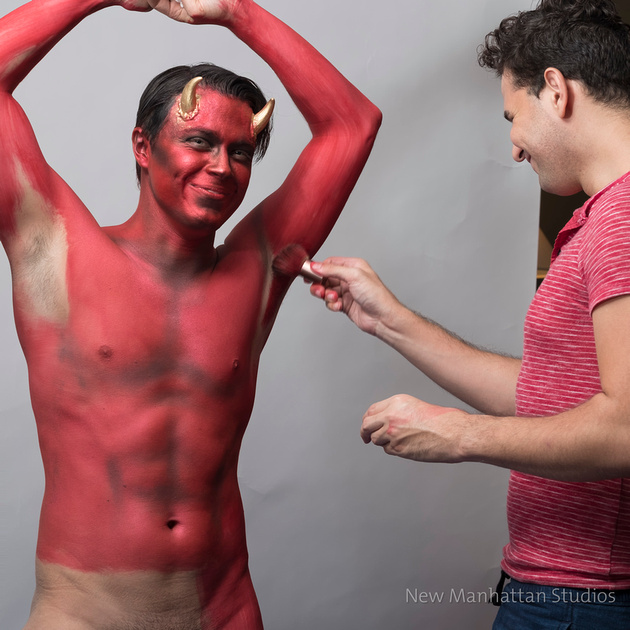 If you have any questions about Charles’ success in bringing the Devil out of Tim, check out the new gallery.  It includes both behind-the-scenes shots as well as the finished art which debuted on Favorite Hunks yesterday.

Did Tim enjoy it?  He announced as much half way through the photo session when he remarked that he’d forgotten how much he enjoyed modeling.  He couldn't wait to show his girlfriend and wouldn't consider showering off before leaving.  He was dropped off late at night and the two of them apparently had a good time haunting the deserted streets of Brooklyn as people were stumbling home from the bars.

Tim was our cover model on Captured Shadows #3, but that was some time ago.  He's very much a busy young man getting on with his life.  I do not foresee a return to modeling.  However. . .

We’re already in discussions about a second body-painting session in a character to be conceived by his girlfriend and brought to life by Charles Zambrano.

Most models who’ve done it agree.  Costumes are fun and body painting sessions are special.