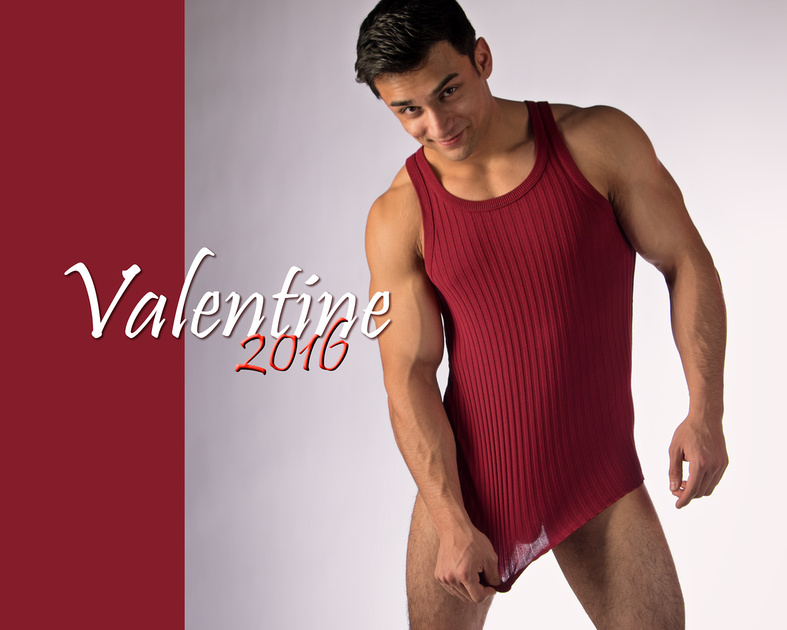 In 2014, Claudiu carried the studio's big box of Valentine's chocolates.  Last year Bond earned the title of the romantic Hunk of the Day-Devoted-to-All-Things-Amorous.  This weekend we happily hand the studio’s banner for Valentine’s Day, 2016, to our 19-year-old, body-builder model, Norm.

Ah, it was déjà vu all over again, as Mr. Berra would say.

As I edited the photos from Norm’s third session with New Manhattan Studios, it was impossible not to compare them to the “red and white” session that we had done with Bond a year earlier.

The elements used in Bond’s session—a tuxedo he had brought to the city for a wedding he was attending, red accessories on-hand in the studio—had led us by chance to doing work that we ultimately saw as our first official Valentine’s Day shoot.  It stands out as one of my favorite sessions from 2015.  Norm’s shoot was more deliberately planned; Bond had left big footprints to follow.

Norm and Bond were both at similar points in their modeling careers at the time of their respective Valentine’s sessions.  In each case, it had been close to a year since the model’s first session with the studio and, having done little more than some basic physique modeling, neither yet had much experience modeling.  Bond was a natural athlete drawn to modeling on a lark with encouragement from friends.  Norm had been introduced to the studio by his gym buddy, Alex, our model/stylist and assistant photographer, who had watched the 18-year-old’s steady and impressive progress in the gym.

While we had haphazardly wound up in February-14th territory with Bond, from the very start of Norm’s last session we discussed doing work that might be used as a Valentine’s photo shoot.  I needed assurance going-in that this young, new-to-modeling bodybuilder would be comfortable posing in this manner and with having the images broadly circulated.

Sitting at the counter in the dressing room before heading out into the studio, we leafed through the published work from Bond’s session and I told Norm that if he was up for it, we’d be aiming for a similar Valentine theme.  I showed him that Bond had set a high bar and that the work had a bit of an erotic edge that would require teasing the camera and some nudity.  I assured him that his work in the gym had paid off and that he was eminently fit for the challenge. To my delight, the young bodybuilder appeared genuinely flattered that he was being considered for such an assignment and assured me that he was “in.” 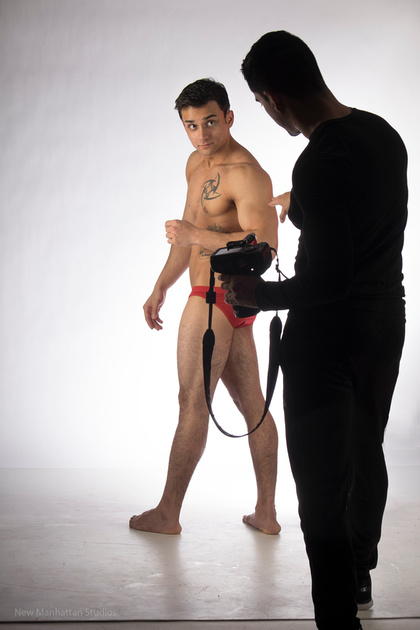 As usual, we spent too much time on the initial set-ups, but such is the nature of warming up for both the photographers and the model.  Norm seemed comforted by the fact that his gym-buddy Alex was working the shoot.  He knew Alex was an experienced model and he was attentive to the directions and pointers being offered by his friend.  Coming from the same town and gym, not only did they have a bit of personal history in common, Alex’s cool and professional demeanor was helpful in putting the new model at ease.  As Norm relaxed, he started getting into the mindset of the shoot.  The camera recorded his blossoming confidence as he started turning on the charm and making eye contact like a pro.

Ultimately, any two photo sessions are as different as the models working in the center of the floor and the casual viewer isn’t going to see many similarities between Bond’s unplanned Valentine’s session and Norm’s more plotted “red session.”  That said, both men met the challenge and delivered striking sets of photos, well-suited to inspiring fantasies of ideal dates for February 14th.

A pair of red-flannel long johns inspired the pursuit of a retro feel in Norm’s Valentine’s shoot.  Part of Bond’s session had a similar mid-century pin-up flavor, too.  But there was a more amusing commonality between the two sessions that might be apparent only to the most attentive viewers.  Bond’s borrowed-from-Dad tuxedo and Norm’s purchased-for-the-occasion red flannel long-johns were each visibly too big.  Any number of clamps and pins couldn’t hide the fact that the models were swimming in the clothing. The solution in both cases was the same:  grab a few establishing shots and then get them out of the ill-fitting clothes as quickly as possible.  Both men did so with panache as the camera’s clicked away.

I am happy to report that not only did Norm enjoy creating some old-fashioned Valentine’s images, but everyone loved the results, including Tye Briggs at Favorite Hunks.  Upon receipt of the first shots from the session, Tye accorded Norm the honor of being the 2016 Valentine’s Hunk at Favorite Hunks.  Tye loves behind-the-scenes shots and provided several on his blog [Click here and here].  We pulled together still more and created a behind-the-scenes video presentation for his readers.  You can view it here.  And be sure to check out Norm's new photographs in the Fine Art Gallery.

And we saved the best news to last:  We are confident that we have not seen the last of Mr. Norm at New Manhattan Studios.  He’s already asking when we can do it again.

Click here for All Things Norm at New Manhattan Studios.