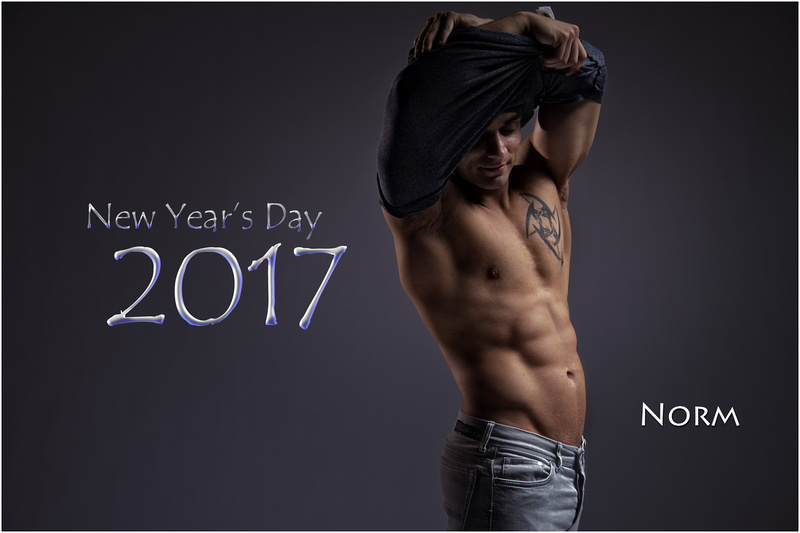 LOOKING FORWARD and BACK

For four spins of the calendar, we have used the first posting of the New Year to pay tribute to notable models that have passed through the studio.

We hesitate to call the distinction our man of the year.  That honorific seems to carry too much weight and baggage.  Instead we pay tribute under the banner of our Man for New Year’s Day. It suggests a tighter focus in time while mischievously pointing a finger at the fleeting nature of our fads and fashions and illuminating how fluid our concept of masculinity is.

In some respects, we see our selection as more a “man of the hour” (as is literally suggested in the accompanying photo essay that appears on New Year's Eve on Favorite Hunks).  This is our man for the New Year.  This is our submission to the collective album of once-in-a-year snapshots of what our culture looks like as the clock strikes midnight and the calendar pages turn.  Here is a man who well represents his generation.  This is the style.  This is the look.  This is who and what we admired at the start of 2017.

Appropriately, the first model to appear on the blog in January of 2014 was Bond.  The focus was on the studio’s new facilities in Long Island City and there was no suggestion that the model exemplified anything more than an aspiring model who had just finished his first photo session.  Prescient posting that it was, however, Bond went on to take the studio and its fans by storm, earning a distinction that year that he still holds:  one of the studio’s most popular models.  If the blog had started earlier, no doubt the lead models of earlier years would have been DZmitry, the fashion and runway model that was an early face of the studio and Alex, the first model that we consistently shot, the PA/cameraman/stylist/muse of the studio.

At the end of the site’s first year we chose to debut our work with one of the most-photographed models of the previous 12 months, Oleksandr.  In what was our first New Year's tribute, we gave 2015's lead slot to the runway model with a winning personality that matched his well-honed, kick boxer physique.  We started 2016 by paying tribute to Timothy a model with whom we had worked since a session in the Berkshires in 2013. We were able to capture the young model three times during his first year in New York and it became the focus of a cover story in Captured Shadows #3. 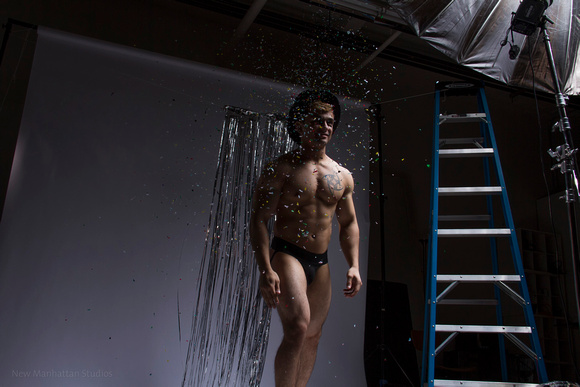 But this is more, of course, than just citing a model as exemplary of the look and feel of his times.  We also pay tribute to these men as models as to these models as men.  In this regard, few models have warranted a turn in the limelight more than this man.

In the two years that we have worked with him we have admired his dedication to his physique work.  From Day I, he has had one of the most impressive torsos we've ever shot and we have seen the man blossom into a confident, accomplished model as he has continued to hone and chisel his physique.  For personal, professional and physical growth alone, this man deserves an award.

We are talking about Norm, 18 and just out of high school when he walked into the studio, accompanied by his gym buddy, Alex, then the studio’s stylist/PA.

Norm is 20 now.  Work from his fourth and fifth sessions, captured late in the year, is being debuted over the holiday weekend on both our blog and on Favorite Hunks.  We had brought Norm back into the studio for a new fitness & physique session that included some art nude work.  While there, we had planned to capture additional work for a holiday-themed feature on Favorite Hunks.  The “New Year’s Eve” shots didn’t turn out as we had hoped and Norm agreed to return for a second session to continue working on the theme.

The result was two photo sessions, both yielding some holiday art but with very different looks and little, if anything, to tie them together.  We're happy to use some of the holiday art for the blog entry here, as it works quite nicely with the focus on the man of the midnight hour.  For the purposes of displaying the work in Norm's galleries, we will take a cue from Favorite Hunks and group the photos into the Midnight Hour and New Year's Morning sessions.  Additional physique art and art nudes from the two sessions can be found in the Fine Art Galleries. 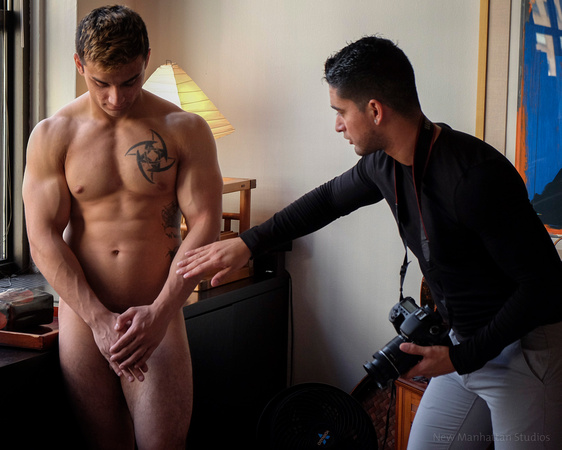 As we approach the second anniversary of our collaboration, we are planning new session to document the progress.  Norm had started bulking up when we shot him in December.  By February the shredding will be complete and we'll have a new look:  Norm 2017.

It's a date.  The lights will be ready.  Quite fittingly for the man of the hour, Norm epitomizes the ripped torso and defined physique that we prize in our photography as we start our sixth year as a studio.

As we hand Norm the honor of being the lead model in 2017, we look forward to the year ahead as much as we honor past work.  We anticipate seeing more of this model in the future and hope to document his personal and professional growth for years to come.

Speaking of the year to come, we will start posting the many models captured in the fall of 2016 as we roll into the New Year.  You can preview the upcoming models here.  A new issue of Captured Shadows is in the works, as are two new studio publications featuring the models cited above, Bond and Oleks.

You can subscribe to the blog (as an RSS feed) by clicking on the SUBSCRIBE button on the bottom left.