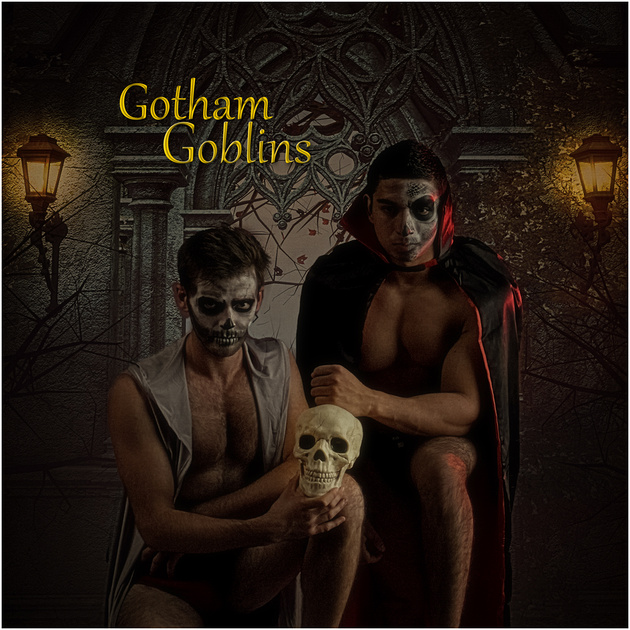 We celebrate Halloween by opening a special (and rather different) gallery, Gotham Goblins.  It’s our way of marking two special anniversaries.

The Halloween-themed photo shoot, a project for Favorite Hunks, was planned far in advance.  Yet it came off in a haphazard manner that left us rolling with the punches and improvising along the way.  We had worked with Mason (left, with skull) in Los Angeles in September.  In mid-October he was in New York, following up on our offer to do a studio session to complement the work we had done in a beautiful home in the Hollywood Hills.  We had already contacted Ricardo about the Halloween goblins shoot; we decided to spend part of Mason’s session with him in costume as well.

I was expecting to work alone.  Alex, the studio’s assistant, was in Florida and I had already warned Mason that he would be steaming his own wardrobe.  Hours before the session, a young lady was referred to me by a business partner.  To my happy surprise, she turned out to be a makeup artist as well as a competent production assistant.  When I seized the opportunity to add a bit of ghoulish body paint to the mix, I added a final complication:  meshing the calendars of more than just the four studio participants.  In the end, I wound up coordinating the schedule of an actor in LA with the class schedule of the baby sitter working for the makeup artist in New York. 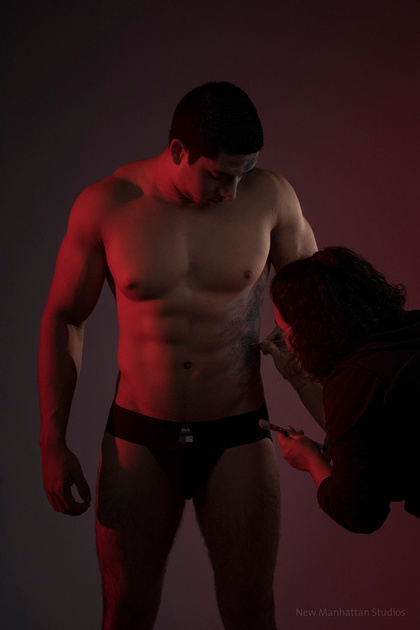 On the day of the shoot, it all came off (as usual).  In the end, we scheduled two back-to-back sessions and delayed the start time by an hour to accommodate the makeup artist.  We had time to capture some basic studio shots with Mason before applying makeup and costumes.  Fortuitously, both the makeup artist and Ricardo arrived early and Ricardo came out of makeup about 15 minutes before the end of Mason’s session.  We had a brief, unplanned window to shoot the two of them on the paper together.

It would have been nice to have planned in advance how to best use a makeup artist for the project and to have had a viable concept for using two models.  But given the intended application of the work, the rather static poses we captured in a very brief time frame made it easier to find suitable background imagery for the composited images.  But this was a fun photo shoot for our friend Tye.  (All three of us have previously interacted with the owner of the Favorite Hunks blog.)  Our objective, above all, was to have fun with it.

For me, the partying was in celebration of two anniversaries.  Halloween marks the fifth anniversary of New Manhattan Studios.  We effectively hung out our corporate shingle on October 31, 2011.  Tye Briggs, the blogmeister of the Canadian-based blog Favorite Hunks, found our work online just a few months later when he asked permission to feature our photos of Drew on his blog.

In the nearly five years since, we have developed a deep admiration for Tye and his labor of love.  He actively seeks out the work of new photographers and models and gives them world-wide exposure to his 25,000 followers.  The studio has gained impressive awareness through our relationship with his blog and Tye has had an outsized influence on both our creative product and our business model.

Favorite Hunks is a well-curated site with a weekly flow of stunning images of attractive men and a loyal following that makes it a networking hub for emerging models, artists and creative ideas.  If you are not familiar with it, check it out here.  It pleases me to acknowledge that October marked the 10th anniversary of Favorite Hunks.  It gives me the opportunity to thank Tye for the invaluable service he provides to our industries.

I am grateful that the studio was in a position to create art specifically for Favorite Hunks as a thank you gesture as they celebrate their tenth anniversary.  I find it especially sweet that the art made its public debut on the studio’s fifth anniversary.  What photographer can’t appreciate the symmetry of that? 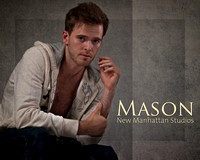 The studio's additional work with Mason O'Sullivan can be found here.