If any of the studio's many models is a class act, surely it is Luca.  A classically-trained ballet dancer who can be found on stages in the U.S. and Europe, Luca splits his time between Milan and New York.  With rehearsals and his performance schedule (and travel back-and-forth between Europe and the States) it has been a challenge to schedule Luca.  Still, New Manhattan Studios has been fortunate to have him in the studio on three separate occasions.

His first appearance before our cameras was in the spring of 2014.  The gallery from his work can be found here.  It was then that we first appreciated the joy of working with an accomplished ballet dancer.  Not only were athletic balletic poses second nature to him, he radiated grace just standing still.

Between our first and second sessions Luca returned to Europe for several months.  But upon arriving back in New York in the fall, we wasted no time in scheduling a second session with him.  In mid-October we captured the series of graceful ballet poses and leaps that you see here.

At the end of his October session, Luca mentioned that his big brother would be traveling to New York for the Christmas holidays.  He asked if we'd be interested in working with him.  He had us when he described Matteo as the soccer-jock/hunk in the family.  We asked if Matteo would be up for a full-on session with the studio and Luca promised to find out.

Matteo was in for doing a full studio session and weeks later, on his Christmas trip to the States, we managed to find a day when both brothers were free to come into the studio.  Matteo had never done a professional modeling session and wanted to have his kid brother along.  The one and only day that worked for all parties was the last day of Matteo's holiday in New York.  At the end of Matteo's session we managed to snag an extra hour to bring our work with Luca up-to-date.  Less than 12 hours later Matteo was off to JFK and his return home. 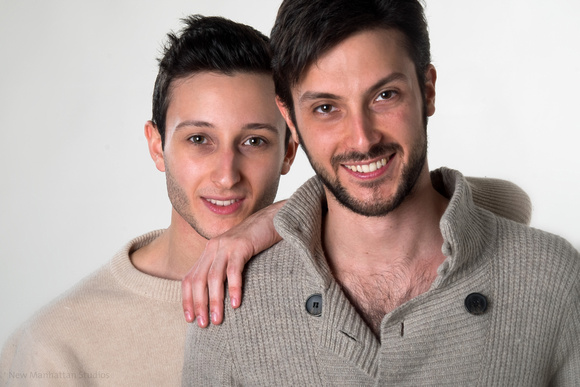 With both brothers now back in Italy, is is possible that this was the last session we will capture of either.  But images from Luca's third session can be found in the new gallery that we are opening with this blog entry.  The astute observer should be able to detect a slight maturation that is evident in some of the pictures.  Luca looks a little less like the boy of 20 that he was when he first arrived at New Manhattan Studios.  But if anything, the elegance and poise that he radiates is more obvious than ever.

If anyone wants to debate whether dancers are athletes, you can compare the physiques of these two brothers.  The soccer-loving jock-brother readily admits that the dancer has the best physique but we'll leave the final call to the viewers.  You can check out Matteo's session here.

What all will agree on is that the two brothers are both photogenic and striking models.  Our favorite shots from that winter day, however, were some "family pictures" that we took just for the boys.  One is shown above.  A few others were taken that won't be hanging above the family mantle.  Perhaps someday we might find an appropriate place to hang them in a studio publication.  Stay tuned.

Meanwhile, you can check out a video presentation with some behind-the-scenes shots from Luca's three sessions.  You can click here to find All-Things-Luca at New Manhattan Studios.  And head over to Favorite Hunks to see that major international blog's feature on Luca's work with New Manhattan Studios.