Retreating to a Sanctuary in the Berkshires 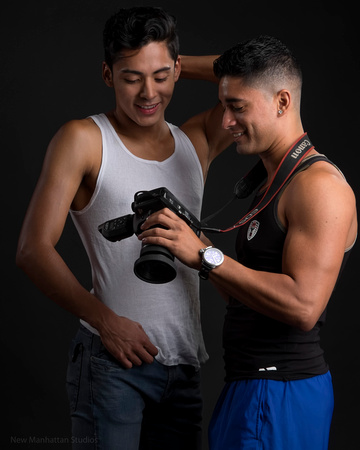 As fall draws to its inevitable close, it’s nice to revisit one of the last photo shoots of summer.  This one is especially fun since I get to relive a photo session in a place where I had never expected to take a model.

Giovanni is an aspiring New York City model with the requisites of success:  classic matinee idol looks and a long, lean body on which the designers will delight in hanging clothes.  This 18-year-old is just entering the business while continuing his education.  He’s another find of the studio’s lieutenant, Alex, who’s added “talent scout” to a business card that now reads stylist, production assistant and second cameraman.

Giovanni had his first-ever professional photo shoot in the studio in late summer.  A couple of weeks later he joined us on a trip to western New England when we did some location shooting on a separate assignment with Alex (in his original role as a model).

I have maintained a second home in the Berkshires of western Massachusetts for over 20 years but I have not shot in the area since spending parts of several months working with eight (mostly local) models on Berkshire Place, published in 2013.  That summer, in search of a private spot of along the Housatonic river at the foot of the hill, I had finally stumbled across something that I had heard about for 20 years but had never seen:  a large concrete dam.  Hidden in a secluded ravine less than a quarter of a mile from my home, it was easily 200 feet across the top with a wall of water cascading 30 feet down to the rocks below.  I was stunned that a structure this big and so close to my weekend home had eluded me for two decades. 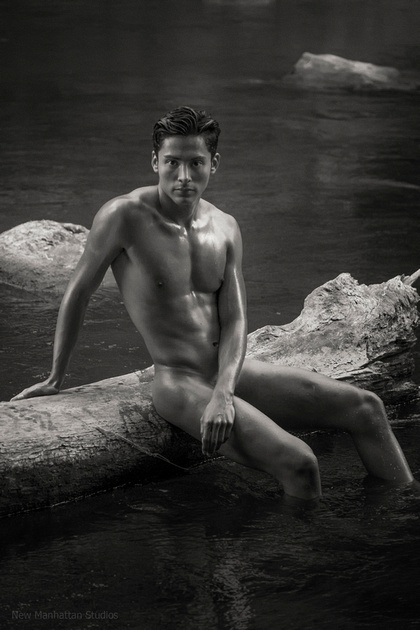 I was also amazed to discover such a perfect shooting venue located so conveniently to the house.  With the cascading waters, the pool below the dam was a dramatic backdrop for photos.  And with only an occasional local fishermen, the area was private enough to do the type of work you’ll find in Berkshire Place.

Giovanni had never been to this corner of New England before, so after Alex’s shoot, the two of us took off to do some sightseeing while my model/assistant had headed upstairs for a nap.  We started off along the river at the foot of the hill and soon enough the cameras came out.  Eventually we found ourselves around the dam, but this late in the summer the cascading waters were but a trickle.  We did capture some shots in the river, but mostly we had set out to do some sightseeing.

Late in the afternoon we wound up on the grounds of one of the grand old estates that had defined the area as a playground for the wealthy during the Victorian era.   Sprawling across 350 acres atop a hill overlooking town, I have often taken tourists to the grounds of this mansion for the view and a glimpse at the lifestyles of the rich and famous from a century ago.

The estate, long ago adapted to a new use, had people milling about the lawns and gardens.  But as we were wondering back to the car I noticed that, late in the day, the area around the fountain and rose garden was quiet.  With no one in sight, I posed the model first against some white pillars and then on the edge of the fountain.  Still with no one watching us, I prodded him into the pool and soon his clothes were wet and clinging to his body as he posed next to the fountain.

As we walked back to the car I suggested that he might want to strip out of some of the wet clothes before getting into the car.  Giovanni hesitated and demurred.  I smiled and understood.  At that point the car was surrounded by a gaggle of nuns.  I’d been surprised we’d gotten away with as much as we had on this property.  A model cavorting in the fountain is certainly out of character for this place today.  Nearly 75 years ago the estate had been purchased by the Catholic Church.

This was the first (and quite probably the last) time I had done a photo shoot at a monastery.

Check out Giovanni's gallery here.  And plan to return in a few weeks when we'll be adding some of his pictures to the Fine Art Gallery.
Keywords: Alex, Berkshire Place, Giovanni, New England, new model, physique
« Previous Post Next Post »