The Cajun from Colombia

This native Colombian comes to us from a home deep in the heart of Cajun country.  Ignacio ("Iggy") is a friend of the studio's stylist and second cameraman, Alex (not coincidentally, also a native of Colombia).  On a trip to visit family in New York we recruited him to be one of several runway models the studio supplied for a series of fashion shows for a New York retailer.  When not working the runway, we succeeded in convincing this fit, 24-year-old to do a photo session.  [Find the full story of Iggy's first session here.] 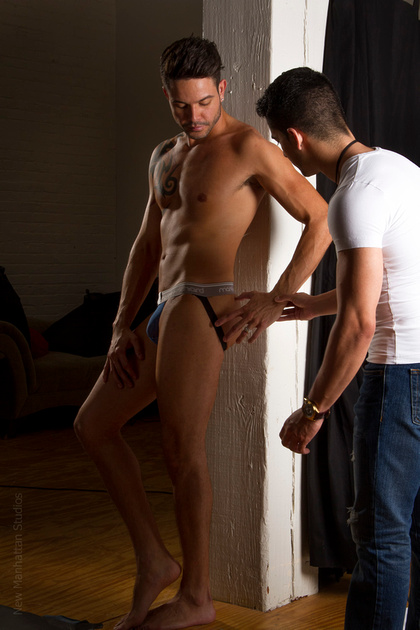 We took full advantage of having this "Latin Cajun" in town for a couple of weeks and shot him in the studio twice, and on location around the city twice.

Iggy had never been to New York before and wanted to take in the sites. The shot above was captured in one of our favorite spots to work:  Roosevelt Island, in the center of the East River and easily accessible from our Long Island City facility.  In addition to posing the Cajun in front of a classic NYC skyline, we worked with him in historic Madison Square and on the High Line, the popular new city park built atop an abandoned elevated rail line running through Chelsea and the West Village.

Since returning home we hear he's been busy in the gym and has taken his trim, toned body to new heights.

Check out Iggy's gallery here.  You'll find folders with almost three dozen images from his several photo sessions and a video presentation that includes even more pictures from his first visit to the Big Apple.

A very NSFW Iggy is one of three models featured in Captured Shadows #4 which can be previewed in the video below.

You can follow Iggy on Instagram at @ignaccio_echeverri and find all of his work with New Manhattan Studios by clicking here.