Ringing in the New Year the Ukrainian Way 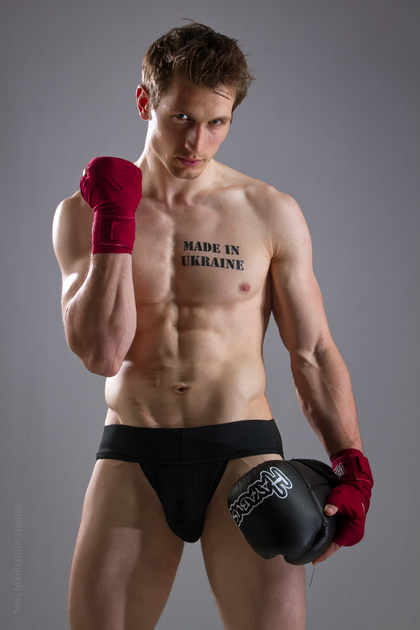 We are ringing in the New Year on January first by opening our newest gallery and debuting the work of one of our top models from 2014.  The model, however, isn't exactly new.  In fact, for those who have been paying close attention, he has been prominently featured in the homepage video that's been online since late last summer.

The fact that he hasn't yet had a gallery at New Manhattan Studios is even more surprising considering the fact that he is one of our most-photographed models and we have completed seven photo sessions dating back to last spring!

We are speaking of Oleksandr, a 23-year-old model from the Ukraine who arrived in New York City last winter by way of Washington State.

Without a doubt, Oleks has an unusual combination of pursuits.  This aspiring model is also a kick-boxer (with the requisite nicks and dents to prove it).  We discussed the fact that it might not be the smartest activity for a model, but clearly he enjoys both pursuits and shows every sign of excelling at each.

One look at the shirtless Oleks and you immediately appreciate that this guy takes physical fitness seriously.  His upper east side gym is a true home base for him.  When he's not working out in his gym, he's working for his gym.  We were delighted, therefore, when he was able to secure permission for us to do a photo session with him at the gym.  You'll find the pictures of Oleks the boxer in one of the two galleries that just opened.

I am always in awe of those models whose personalities are as outstanding as their looks or physique.  Oleks is one of those.  Totally unpretentious, he is open, approachable, bright, engaging and a delight to work with.  And that smile?  It isn't just for the camera.  That's his natural state.

With his cooperative attitude, the winning smile, his chiseled physique and the matinee idol looks, I felt like I was shooting fish in a barrel.  I loved the results of our collaboration.  That said, I never know what type of reaction I am going to get from a model when he or she sees the edited images.  Most are professional and express thanks (if not compliments) when they get their copies of the photos.  Some walk out of the studio and are never heard from again.  Oleks was not only generous in sharing his compliments for our work, he added that his wife loved the pictures, too, and that she said that they reminded her of why she had married him!  (Now that's a compliment I'll treasure!) 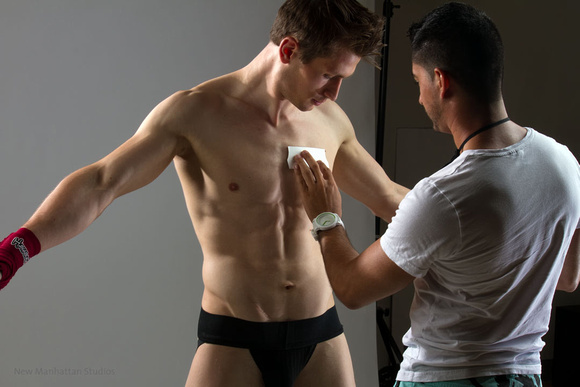 Oleks shared his wife's comments about a week after the session when he was sitting at my computer scanning through the hundreds of pictures we'd taken.  It piqued my curiosity and I asked if she were cute.  His response amused me:  "Of course."  (That was—and is—the only hint of vanity I've ever heard from him.)  I asked if she was also a model.  "No."  I asked if she might be interested in modeling.  "Perhaps."  To make a long story short, two weeks later she was in the studio for her own session.  (Stay tuned for "All In the Family, Part II.)

Today we celebrate the New Year by opening two galleries for Oleksandr.  They feature work from three of the seven sessions we have done together.  (More, obviously, will follow.)  He earned the coveted cover spot on the studio's 2015 calendar and we're happy to report that Oleks has signed on for two of our book projects.  The first one has just come off the press: Oleksandr is one of six New York models featured in the studio's 2014 models portfolio, Gramercy Square.  We're pleased to let his fans know that still more of Oleks can be seen later in the year when a special publication, shot on location in Lancaster, Pennsylvania, is finished. 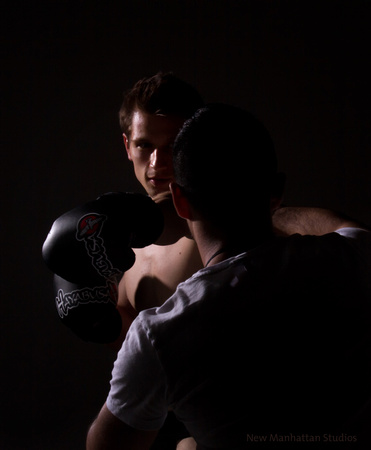 You can check out both of Olek's galleries here.  You can also watch a video presentation of the work from his first photo shoots by clicking here.  More will follow.  As will a special gallery with photos from his wife's photo session.  Subscribe to the blog feed (link on the bottom left) to get the latest updates when new galleries open.

So given the fact that Oleks has figured so prominently and frequently in the studio's schedule in the past seven months, what took so long to take his work public?

The answer is quite simple, actually.  He is clearly one of our top models in 2014 and we were waiting for a special occasion to debut Olek's work.

What can be more special than reserving the first spot of the year for him?

Oleksandr is one of six models featured in the studio's 2014 Models Portfolio: