All in the Family

Our newest gallery is a special one.  We have been waiting since January to introduce the studio’s latest model; a 21-year-old, avid body-builder. And in a first for the studio, he’s the younger brother of another model; the studio’s most popular model, Alex.

Ricardo had never modeled.  But Alex, watching the progress his kid brother was making in the gym, encouraged Ricardo to document all of his hard work with a professional physique photo session.  I’m not going to guess whether or not this was an easy sale to make (we had been discussing it since last fall), but in January of this year, Ricardo agreed and showed up in the studio for his first-ever modeling session. 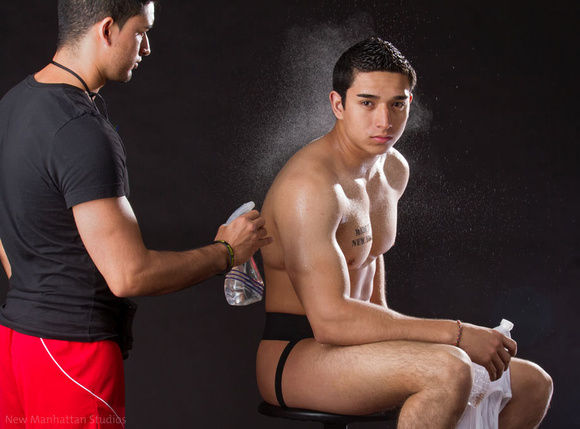 I’ve known Ricardo for a couple of years but I certainly can’t say I know him well.  What I did know is that he is a very taciturn young man.  He possesses a gentle and quietly engaging personality but he is, definitely, a person of few words.  It was hard, therefore, to determine whether or not he was enjoying being the center of the attention in the studio. The flexing and the posing came easy for him but, as with many new models, initially he looked like the proverbial deer caught in the headlights (or strobe lights in this case).  Midway through the session, though, he relaxed and we started getting some very natural smiles out of him.  By the end of the shoot he did seem to be enjoying himself, enough so that before leaving he agreed to come back for a second session.

Without a doubt, Ricardo walked into the studio in January with an impressive physique and I quickly understood why Alex had been encouraging his kid brother to pay off all his hard work in the gym with a photo session.  But despite his willingness to do a second photo shoot, the follow-up session was several months later.  Ricardo was determined to return with an even-more imposing physique.  I’m not identifying which pictures are from which session in his online gallery, I’ll let you have fun sorting them out.  And in so doing, keep in mind that Ricardo is still hard at work in the gym and has promised to return again at the end of the summer.  If all goes as planned, we’ll have the privilege of documenting this young body-builder’s progress over the course of the year. 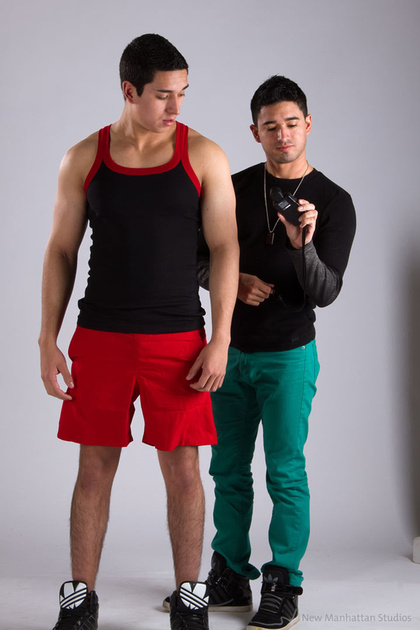 Please note that I have taken pains not to refer to Alex as the “big brother.”  To his chagrin, his “kid brother” is definitely the bigger brother.  Alex cringed when he first saw what I refer to as the family Christmas Card shot on the right (and it’s only with his explicit permission that I’m sharing it now).  But the second picture here is more than a bit misleading.  Owing to a very long lens and their relative positions vis-à-vis the camera, Ricardo appears to tower over Alex.  Yes, Ricardo is the bigger model. . .but trust me, not by much as would appear here.

View a video presentation of Ricardo's photo shoots by clicking here; you can enter his gallery directly by clicking here.  Ricardo is one of six models featured in the studio's 2014 Models Portfolio, Gramercy Square, to be released in December of 2014.

Note that above I referred to this as a "first" for the studio, but more is planned.  Yes, we hope to get Ricardo back for another session, but we have a second All In the Family series that we're working on for later in the year, too. Then, In yet another "first," we'll be introducing a husband and wife modeling duo!  To make sure you don't miss these updates, you can subscribe to the blog by scrolling down this page and clicking on the "subscribe" link on the lower left.

Check out All Things Ricardo for a complete listing of all of Ricardo's published work at New Manhattan Studios.