Late in the winter I did what many New Yorkers do, I bolted for the sunny climes of Florida.  Don’t get me wrong; I love winter.  Snow doesn’t faze me in the least.   As a resident of Manhattan, I don’t have to drive in it and I don’t have to shovel it.  What’s not to like, especially for a photographer?  It transforms the city into a glistening white wonderland. . .for at least an hour or two.  But even for snow-lovers like me, the winter of 2014 was brutal in the northeast.  When I had an invitation to head down to Fort Lauderdale to savor a few days of spring in the midst of “the cruelest winter ever,” I jumped at the chance.  The fact that the invitation came from Gordon, a dear friend and respected professional colleague (and that it included a chance to work together), it was an offer that could not be refused.

Gabriel and I corresponded by email, exchanging pictures from our respective portfolios.  When we finally set a date to shoot, our timing was a near-miss.  This 25-year-old actor from Venezuela was moving to British Columbia a few days after our scheduled session.  Our shooting venue was a gracious home, secured by Gordon, on the Intercoastal waterway in Fort Lauderdale.  I can believe that the house was more accustomed to photo teams from Architectural Digest but it was perfect for our needs and the ideal foil for our handsome young model.

Gabriel understood that his shoot was for one of the studio’s publications.  So upon his arrival he was given a copy of Cortlandt Manor to illustrate how his photographs might be used.  Earning points in my mental book, he carefully leafed through each page of the book.  As he approached the end of the book he let out an audible squeal, “I know him!”  I looked over, but he had gone silent.  He was intently looking at one of the international models in the book and turning the final pages very slowly.  When he reached the end he looked up with a smile of contentment.  “Oh.  My.”  (Perhaps there was an unspoken “finally,” in his voice, too.)  I was dumbstruck at the thought that I was sitting in Florida with a model from South America. . .who knew a model from Europe that I had shot in New York.  Gordon and I couldn’t wait to hear the story. 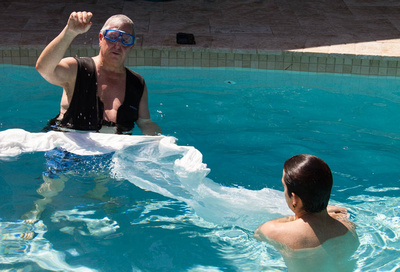 The story didn’t disappoint:  their past was much more than just a brief meeting on some commercial shoot in the Caribbean.  It turns out that a few years earlier my New York model had lived for a short time in Miami.  He had dated the cousin of Gabriel’s best friend.  The four of them would see each other at family gatherings and occasionally hang out together.  They knew each other.

I suspect Gabriel would have loved to have shared the book with his friend (it can be purchased here, Gabriel) and I filed the episode under “Small world getting smaller.”  For Gabriel, seeing the book gave him a bit of assurance that he was in professional hands.  He didn’t know what to expect; this was his first-ever art nude photo session. 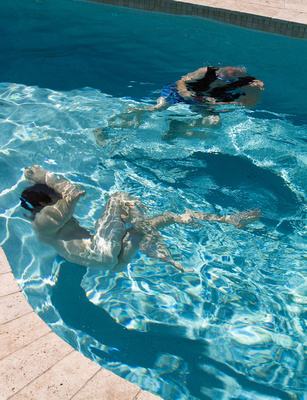 I can confidently say that what followed was, for all involved, a great deal of fun.  Most models enjoy their work.  I’ve even had one tell me that it’s like meditation; he goes into his zone and just “Zens out.”  But having attended a previous session, I can assure you that working with Gordon is indeed fun and very special.

Gordon Nebeker is an accomplished, published and award-winning fine art photographer who has had numerous exhibitions of his work in galleries up and down the east coast.  He has two notable signature props:  one is a piece of fabric, the second is a pool of water. . .water to work under!  He crafts impressive images with both and when he combines the two, the results are pure magic.  See for yourself on Gordon’s website.  For models, working with Gordon isn’t just fun around a pool, it’s a truly unique experience.  They’re posing underwater; holding their breath and opening their eyes for extended periods of time as the cloth spins and drifts in the water around them.

As you might detect, I am a huge fan of Gordon’s work.  I would never attempt to duplicate it but I am more than happy to promote it and Gordon was kind enough to allow me to share these pictures of him and Gabriel at work.  For my part, I consider myself fortunate to have such a respected colleague as a friend.  We have each referred models to the other and have worked together on a couple of occasions.  Fittingly, it was a model that helped forge our bond of friendship.  Follow the link above and look at the models in Gordon’s pictures.  The close observer will find not one but two pictures of our mutual friend, model, and the studio’s stylist/production assistant, Alex. 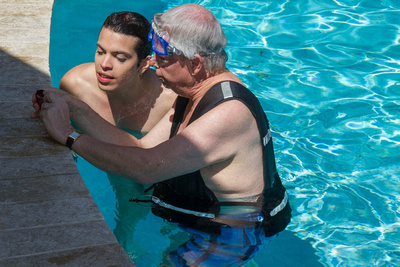 But this is a blog entry about Gabriel.  I am always in awe of the courage it takes for a model to do his first art nude photo session.  More often than not he is working with a stranger and must place a great deal of faith in the talents and motivation of someone he does not know.  Such was the case here.  Gabriel had met neither Gordon nor me until the morning of our shoot.

Gabriel admitted that his agent wasn’t at all sure that she approved of his doing a nude photo-shoot, let alone with a stranger from New York.  But ultimately Gabriel’s logic and motivation won her over.  Paraphrasing, he knew he was only going to be 25 once and just once he wanted to document his looks in his prime.  Gordon and I were lucky to have been in the right place at the right time to win the assignment.  We hope we succeeded in capturing his spirit as well as his stunning Latin good looks.  Decide for yourself.  Check out his gallery or view a video presentation of his photos here at New Manhattan Studios.