"Hutzpah." It's a Yiddish term for audacity and nerve. 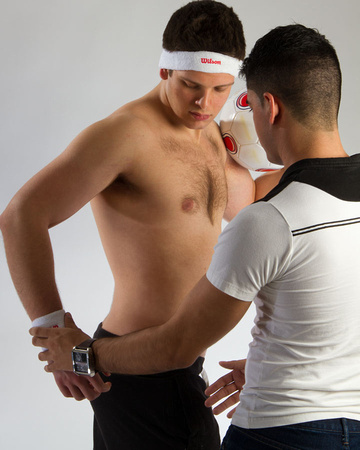 Perseus and I had corresponded for several weeks before we met.  Photos had been exchanged from our respective portfolios.  Sizes were known.  A few last-minute texts had discussed chest and facial hair and even revealed the nickname of Dragon Voice.  But I was woefully unprepared for the model that came through the door.

I hate to admit to having a head full of stereotypes but I think the model’s chosen professional name had a lot to do with the mental image that I’d conjured.  Despite the legendary heroic attributes associated with the name Perseus (running from Greek mythology through a number of contemporary films and stories under the title of Clash of the Titans), my mind's eye calls forth "Perseus" as a wimpish blond preppy with horn-rimmed glasses and a trust fund.  I suspect he lisps, too.

I’m not sure of from where in my background these associations come—perhaps a comic book charcter from my youth or a black-and-white movie from the 1940s—but the reality of the 19-year-old Texan that walked through the door was much closer to the heroic character of Greek mythology.  "Titan" fits, and the huge guy would have been intimidating were it not for his gentle demeanor and disarming personality.  And when he spoke, the source of the nickname Dragon Voice was obvious.  Perseus spoke with such a sonorous basso profondo voice that looking at him you had to wonder where it originated. . .somewhere downstairs, perhaps, but not in this room.

Perseus’ earlier text about the new facial hair he'd grown since his last portfolio pictures had been answered with my pat response:  "Don't shave yet.  Come in as you are and let’s see it."  At the very least, it's great to get a variety of looks in a single photo session.  The stylized goatee looked fashionable on the young man but it clearly achieved what may have been the desired effect:  it made him look older.  Half way through the session Perseus lost a few years in the bathroom when the goatee was traded for a clean-shaven look.

We worked for over three hours and captured a wide variety of looks and images.  Enough to fill a gallery with shots of the 19-year-old Titan.  But perhaps the most memorable part of Perseus’ session came a half hour after the strobe lights were turned off.   Most models do not eat before their shoots and some take fasting to the extreme and do not eat the day of their shoots.  So I always assume that the model hasn't eaten for several hours and usually have light nibbles on hand (trail mix, yoghurt).  As a reward for their dedication and expecting them to be hungry after a 3-hour photo session, I typically offer to take the models and studio staff out to lunch or dinner after the shoot.   It was after 10PM in midtown Manhattan when we finished with Perseus.   The offer of dinner was happily accepted but no one wanted to stay out much later so we wound up at a Greek dinner in the neighborhood. 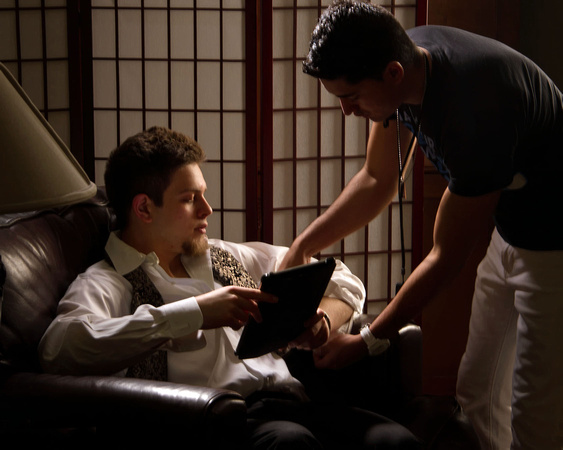 While we waited for the meal to be served the conversation turned to Perseus’ deep voice and Alex, the studio’s stylist (also pictured here), asked him if he sang.  When he said yes, I told about once having seen an amateur singer walk up to the mike in a Manhattan piano bar and, with a similar deep voice, proceed to sing the most riveting version of Old Man River that I had heard this side of Paul Robeson in Showboat.  Perseus replied that Old Man River was one of the best songs ever written for his voice range.

And with that, without prompting and without accompaniment, Perseus started singing. . .in a quiet neighborhood diner on the east side of Manhattan at 10:30 on a Tuesday night.   Old Man River is not a song that can be sung softly, it’s a Broadway show tune that demands to be belted out at full basso profundo voice.

Perseus did not hold back; he gave it his all.  A couple dozen heads turned toward our table, smiling appreciatively at the impromptu a cappella performance.   This being New York, at the end of the song there was a polite round of applause and our fellow diners, smiling, returned to their meals and conversations.  I wasn’t quite as blasé as the others in the room.  I sat there, four feet away, in awe of what had just happened.  As we say in New York this kid has hutzpah!  And, wow!  Can this guy sing!

Click here to enter Perseus’ gallery.  But before you do, you might want to rack up Paul Robeson.  Looking at his pictures while listening to Robeson you’ll be able to appreciate Perseus’ nickname Dragon Voice.  A video presentation of the images from his photo shoot can be seen here.