Yet Another Small-World Tale 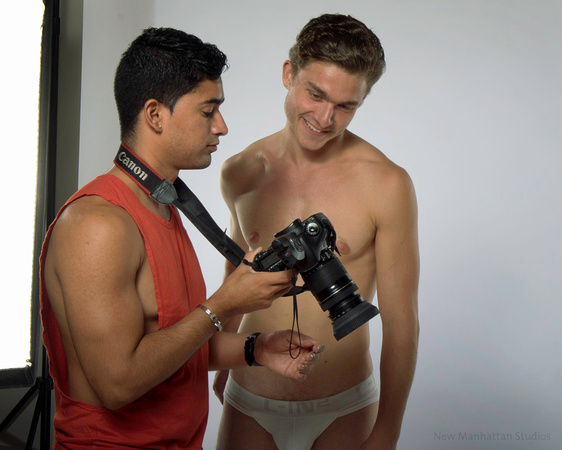 Michael is one of 10 models featured in Captured Shadows #2

Michael was new to New York City when we had the opportunity to work with him this fall.  Recently out of school, he had just moved to the city from upstate New York.  Fortunately one of the hardest parts of moving to the city was already behind him:  he had quickly found an apartment and was busy settling in when we shot with him.  That allowed him to focus on the equally-demanding task of job hunting.

Michael had a limited amount of modeling experience but he is essentially new to the business and was busy searching out modeling opportunities and other work. Despite the lack of experience, he seemed quite the natural in front of the camera and the session went well.  Unfortunately a job offer took him out of the city shortly after our session and we haven't been able to schedule a second session.

Michael's was one of two sessions that we had that week, and co-incidentally they were both with newly-minted New Yorkers, both having arrived in the city within days of each other earlier in the month. The second model was from the Rocky Mountain states.  And like Michael, he had already settled into new living space, just outside the city.  But he was not job-searching.  To our surprise, first and foremost, the second model was an artist, a serious artist.  When he had been online searching for models for his paintings he had signed himself up as a potential model, just for the fun of it.  And serendipitously, we had found each other. 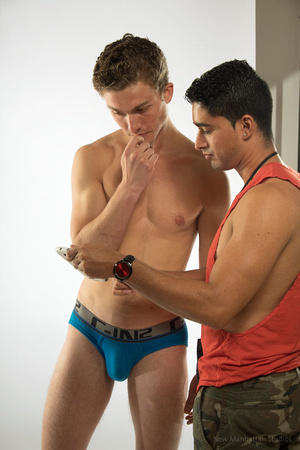 OK.  We schedule two models, back-to-back.  One on Monday.  The second on Tuesday.

Both are brand new to the city, each having arrived within the previous ten days, one from the northeast, the other from the west.  Both are new to modeling.  Both are, co-incidentally, blonds.

When we started the second session on Tuesday I forgot to put in a new media card and the one in the camera quickly filled up.  When I stopped to change cards I casually mentioned the previous day's session and told the model that he was sharing a media card with another blond.  It was enough to pique his curiosity and he asked to see the back of the camera before I removed the card.

He looked at the small image on the camera's display and hesitantly asked the model's name.  When I told him that it was "Michael" he stared at me in disbelief and stammered, "I have him booked to model for me tomorrow!"

This city is full of models.  There are thousands of them.  It's also full of artists. Thousands, again.  And as with just about any other industry in the city, it's a small world and a tight-knit community.

But really, now!  What are the odds of this?

I couldn't help but remember working with Gabriel this past March.  There I was in Florida, shooting a model from Venezuela, who personally knew a model from Hungary that I'd previously shot in New York.  (See Small World Getting Smaller.)

And no, I'm not revealing the name of the second model yet.  You'll have to stick around for that.  His gallery should be going up in early 2015. (Click on the link at the bottom left to subscribe to the blog and you'll be notified each time a new model is posted to the site.)

Meanwhile, I think I'll use a new song this New Year's Eve:  It's a Small World after All.

And it just keeps getting smaller!