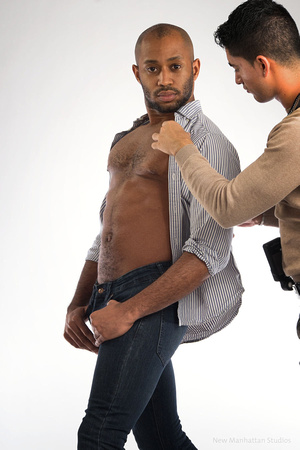 Lamar came to the studio by the route that a number of recent models have travelled:  he's a friend and acquaintance of the studio's stylist/production assistant (and increasingly, second photographer), Alex.

A dancer, actor and director, this native New Yorker has recently added writer to his resume as well.  He's working on a screen play.  Although he has modeled before, it hasn't been for a few years, so he wasn't quite sure of what to expect prior to arriving in the studios.  Which was only fair, since Alex hadn't seen him in some time, we didn't know what to expect either.  (I don't think any of us were disappointed.)

But—dancer that he his—Lamar is in top physical condition.  And as has been noted before, it's always a pleasure to work with a trained dancer.  Not only is there is a certain poise and fluidity to their movements, but there is a grace and lissomeness to their bearing that reflects even in a still photo.  Lamar brought all of that to his photo session and more.  You can click through to Lamar's gallery here. 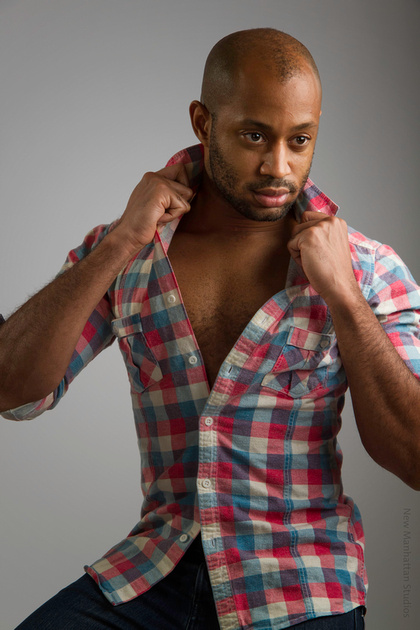 We don't segregate photos by photographer on the site, but note that about a third of the images in Lamar's gallery were taken by his friend, Alex, including the one at the right.  And, of course, that's Alex (camera and light meter hanging around his neck) in his role as stylist, in the shot on the above, left.

You can see a video presentation of the larger set of shots from Lamar's session by clicking here.

With a personality as magnetic as his appearance, we hope to see Lamar back in the studio in the future.