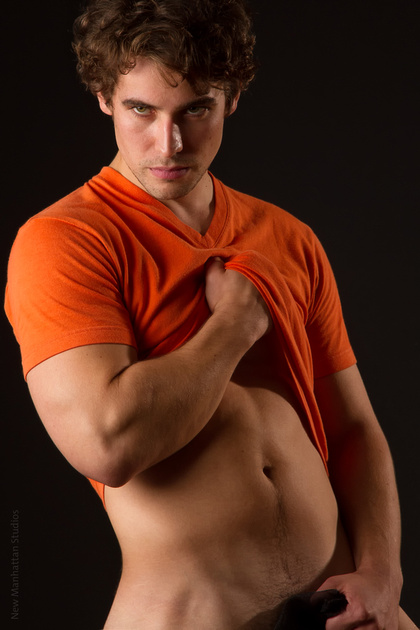 There are several stories here, but we'll lead with the news that this weekend our latest work with Bond, a 2014 New Manhattan Studios model, is making its debut appearance on Favorite Hunks, a blog run out of Canada by Tye Briggs.  In what is quite a coup for both the model and the studio, Bond's new photos are being introduced over the course of the Halloween weekend.  Favorite Hunks, with news, features and photos on actors, models and media celebrities, has a large international following. We are pleased that the initial appearance of these images will reach such a wide audience on a site that includes agents and talent scouts in its tens of thousands of fans.

And we're happy that it's happening on Halloween weekend.  Just co-incidentally, there's a distinctly seasonal look to a chunk of the images and part two of the story is about the accidental Halloween color theme.

Bond, is a model we have worked with since January.  In fact, he was both the first model posted on the blog this year and the first model to work with us in our new Long Island City facility.  Over the course of the year we have now worked with him five more times.

Bond had returned to our studio in mid-October for what we all were billing as "his last New York City" photo session.  After several years in New York, he has made the decision to move to California at the end of the year.  In fact, he's already pulled up stakes in NYC and is "home" in upstate New York through the holidays before decamping for the West Coast in early 2015.

We had started out his session with a number of fashion and fun shots on white paper and wound up doing head shots with the model in a bright orange shirt.  When we moved to the other side of the studio to do some art nudes with a sheer black cloth on black paper, Bond was still wearing the orange shirt.  As he held the fabric up to his shirt he joked, "Just in time for Halloween!"  Indeed the palette had a holiday feel to it.  I loved the contrast of the bright orange against the black and asked him to keep the shirt on for the first part of the art nude work. . .and the Halloween images were born.

The next part of the story is that these images almost didn't make it out of the studio.  Unbeknownst to me, my camera was malfunctioning and I did not realize until I was downloading the images on the PC late that night that most of the work we did on the black paper was ever-so-slightly out of focus—enough so that very few of the images were usable.  Fortunately, Alex, the studio's stylist and production assistant, had grabbed a second camera and was also shooting his good friend, Bond. 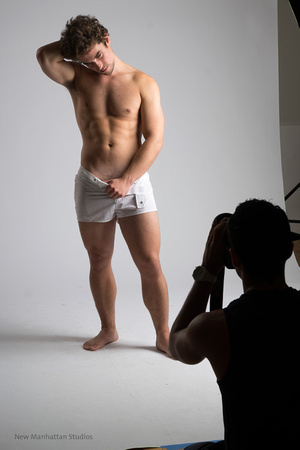 Alex has been picking up the camera of late and has become quite adept with the Canon equipment.  Enough so that he saved the day for us at Bond's shoot.  Most of the pictures taken on the black paper during the second half of the session were taken by Alex, including the picture above.

We can expect to see more of Alex's work in the future.  As you can see from the picture on the right, he's now operating on all sides of the camera:  in front of it as a model, beside it as a stylist, and now behind it as a photographer in his own right.

The last part of the story here is perhaps the most compelling:  it's about Bond's evolution as a model.  We invite you to contemplate the picture above and then click on the link to his first blog entry or his January gallery.  It's almost impossible to believe they're the same model.  Bond's changing looks is nothing short of startling.  In the space of ten months he's gone from the cute boy next door to a smoldering hunk.  That he is getting the star treatment on Favorite Hunks is not only understandable, it's deserved.

Over the course of the weekend, many of Bob's October pictures will be featured on Favorite Hunks, along with a retrospective of his work going back to January of this year and the story of his work with New Manhattan Studios.  Two galleries have been opened on our site that feature his work in two October 2014 sessions.  Additional galleries will open here later that includes Bond's work from the spring and summer and his final "last" New York City photo session.

Check out the video presentation of Bond's October sessions and use the links below to read the full story of Bond's work with New Manhattan Studios on Favorite Hunks.

Then plan to return to this blog.  Over the next few months we'll be opening additional galleries of our work with Bond.  Don't miss a beat.  You can use the "subscribe" button at the bottom left of the screen to sign up to receive notices when new material is posted on the blog.

[In February of 2015, Bond was the featured model on Favorite Hunks on Valentine's Day.  Click here to see the post.]