Cell Phones are good for more than just selfies 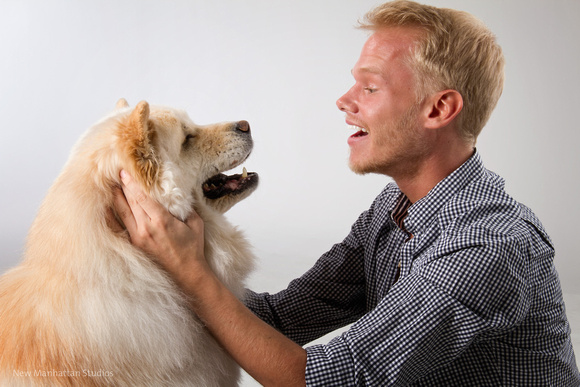 It became apparent in our initial correspondence with Jake that the trickiest part of scheduling a session with the 21-year-old blond model from southern New Jersey would be finding a dog sitter for his blond chow, Sheeba. Despite the showbiz admonition about never working with children or dogs, ultimately we suggested that he bring her along.

In the end it gave us an opportunity to work with not just two models, but with two blonds!  (We're always up for practicing with two models.  We don't do it often and it's more than twice as hard as working with one.)  Happily, Jake had an eager co-star who behaved herself admirably in the studio and did not upstage her human.  And practice we got!  Not just with posing two models, but also with one who—though eager and willing—understood limited English.

Ultimately, Jake liked the resulting images of him and his dog so it didn't take much prompting to get him back up to the City, the second time for an overnight stay and back-to-back shoots on consecutive days.

On a Tuesday a few weeks later, Jake parked his car at the New Jersey home of Alex, our stylist, and the two of them come into Manhattan together.  We took off immediately to do some fashion-oriented work around a lovely neighborhood park with historic townhouses in the background.  Eventually we made our way downtown to the Financial District to shoot around the Yacht Basin at the World Financial Center.

Arriving in the late afternoon, we wound up walking right past the million-dollar yachts to the edge of the water.  The sun was bouncing off the Hudson River and I thought it would make for a dramatic background, backlighting the model.  Shooting into the sun, Alex was put to work holding a 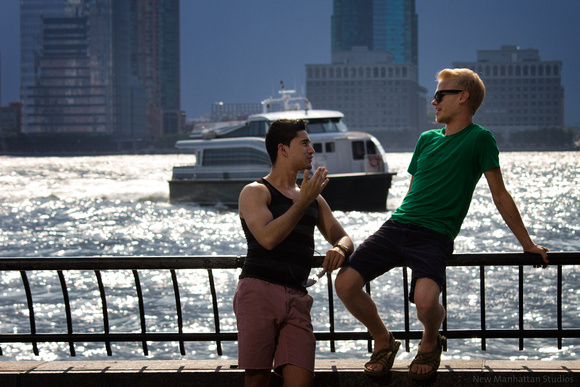 large reflector to bounce light back into the model's face.  Later we moved down to a position closer to the water where I noticed that the reflector wasn’t necessary:  a light source was already illuminating the model.  I turned around and saw that the sun was bouncing off a glass tower.  At that time of day and year, in this particular place, one of Lower Manhattan's glass skyscrapers turns into a 40-story reflector.  In fact, the contribution of Alex’s lame, hand-held reflector was barely noticeable; he put it down and wondered off as Jake and I continued shooting.

Alex was back in a few minutes, encouraging us to speed things up:  a storm was heading our way.  Sure enough, as I looked up, the skies over New Jersey were full of storm clouds.  As we continued working, the sun was still shining on both the river and the glass wall behind us even as the sky behind the model darkened ominously.  The contrasts in front of me were spectacular; the bright sunlight on the water, the dark sky above it: one of those rare, fleeting moments that a photographer can wait months to capture.

Indeed, within just a few minutes the clouds had obliterated the sun.  The magic light was gone.  Nearing 5:30, we packed things up.  Just moments after we hailed a cab for the ride uptown, the downpour hit our area.  We retreated to a Midtown restaurant for an early dinner and when it came out that Jake had never been to Broadway, we headed over to the half-price ticket booth in Times Square and snagged tickets for Mama Mia. 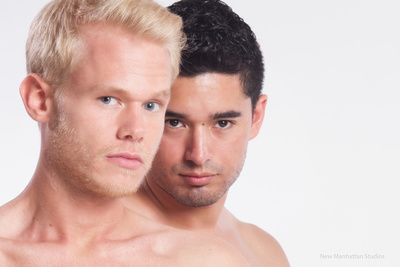 The boys partied until all hours but looked none the worse for wear the next day (ah, youth!).  We arrived at the studio around noon and got in a solid 3 hours of work before Jake had to climb into his car for the long trip home.  Fortunately, before he left we had an opportunity to have a bit more practice with two models.  Instead of two blonds, however, Alex stepped into the scene and we got some great "salt and pepper" shots of the Nordic Blond and the South American Latino.

Check out Jake's gallery here or view a video presentation of the pictures from his shoots.

The last picture (below) is not mine.  It is a shot taken by Alex, model, stylist and our production assistant.  When he put down the reflector on Tuesday he wandered south in Battery Park, toward a view of the Statue of Liberty and his home town on the other side of the Hudson.  Many times the best photograph is all about having your equipment in the right place at the right time.  With the clouds rolling in he pulled out his cell phone and captured a dramatic photo of the approaching storm.  With all due respect for our model (and thousands of dollars in Canon equipment), this was the picture of the day.  And it was taken with a cellphone, no less!

This is not the only photo by Alex that you will be seeing from the studio.  Since then he has routinely been picking up a camera at our shoots.  When he's not tweaking the lights or the model's shirt, he can often be found on the floor behind a camera.  Keep watching.  You'll be seeing more of his work.  Subscribe to the blog posts (using the button on the bottom left) so you don't miss a posting or a new model.