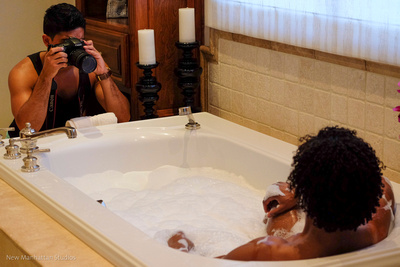 A beautiful home in the Hollywood Hills was the studio's base for several days  and it was there that we finally met up with Brandon, one of several models that we shot in California. Of the people that passed through the grand Hollywood house (including a half-dozen models), none seemed to fit the space as comfortably as Brandon. He wore his surroundings like a fine leather glove.  Looking totally at home, he added a 20s-something verve to the stylish rooms.  In short, he was a class act.

The studio follows many models (and vice-versa) on a variety of social media platforms.  Brandon and Alex, the studio's stylist, assistant, photographer and talent recruiter, had been pinging each other for years.  As far back as 2015, when Brandon was still living on the east coast, we had attempted to schedule a session with him while we were working in the Washington, DC, area.  Time passed and we failed to coordinate a date before the model moved to northern California.

A half year later we hoped to work with him in San Francisco on our annual trip to California.  But by the time we arrived in San Francisco, Brandon had already moved on to Los Angeles. 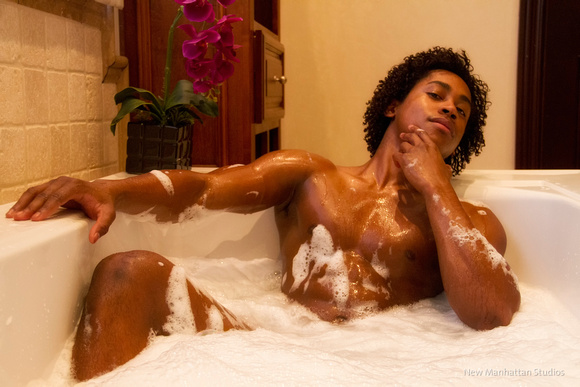 Finally, last year, we met up with Brandon in Hollywood where the model was pursuing a musical career with a band.  It was worth the wait, as I trust the viewer will agree.  Brandon has one of the most toned physiques in our portfolio and we look forward to adding more to our body of work with him on one of his future trips east.  In the meantime, we have opened a gallery of our work with him in California in 2016.  A number of Brandon's photos also appear in the recent additions section of our Fine Art Gallery.  (If you can't find them there, they might have already moved to their permanent home: the A-F folder in the Fine Art Gallery.)

Brandon will be featured in an upcoming issue of Captured Shadows dedicated to the several West Coast models that are now part of the studio's portfolio.  Watch for it later this summer.  To be notified of the publication date, you can subscribe to the blog's RSS feed using the "subscribe" button at the bottom of the screen.  In the meantime, expect to see several new galleries open in the coming weeks that feature the rest of our Golden State men.